Net Positive Education (NPE) is an approach to school design that leverages the Net Zero Energy (NZE) design process to create an environment that not only conserves resources, but also enhances the performance of the environment across factors including daylight, acoustics, thermal comfort, and indoor air quality—factors that research proves foster enhanced educational outcomes. Net Positive Education takes sustainable, high-performance design many steps further by then implementing these concepts into the educational curriculum. 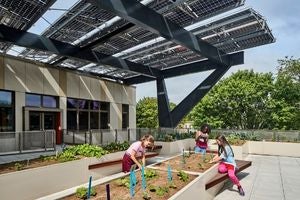 How can design enhance learning? We’ve got a large stable of research answering this question. 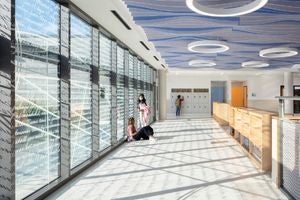 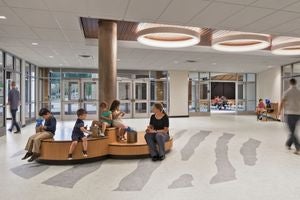 How do we design for safe and healthy children? The answer lies in the details.

This elementary-school renovation demonstrates how design can enhance equity:

Our white paper, “Investing in Our Future,” found that daylight is the most common quality students identified as bringing out positive emotions, leading to better concentration and overall wellbeing. We found that students in classrooms with windows perform 20% faster on math tests and 26% faster on reading tests than students in windowless classrooms.

Too much ambient noise, on the other hand, was most frequently linked to negative feelings. Poor acoustics can cause teachers to strain their voices to be heard, causing fatigue, while they also interfere with students’ ability to concentrate and learn. One study revealed that students at a school under a nearby airport’s flight path performed 20% worse on a reading test than students at a school without such distractions.

Students learn better—and instructors teach better—when their classrooms are neither too hot nor too cold. Thermal discomfort can cause feelings of fatigue, irritability, and depression. Studies have shown that for every decrease of 1.8 degrees Fahrenheit between 77 and 68, students’ speed and performance on any given task improved by two to four percent.

Healthy air quality can reduce instances of respiratory illness among students, which thereby increases school attendance. It has also shown to increase task-completion speeds and their overall grades. Studies have found that students in classrooms with higher ventilation rates scored 14-15% higher on standardized tests.

How does Net Zero Energy impact a school’s curriculum?

How do Net Zero Positive projects enhance the broader community?
They increase resiliency, providing space for gathering, and shared resources such as health services and community education.

How can programming and design impact the whole child?

White Paper: Investing in Our Future