Perkins Eastman Studios Give Back for the Holidays 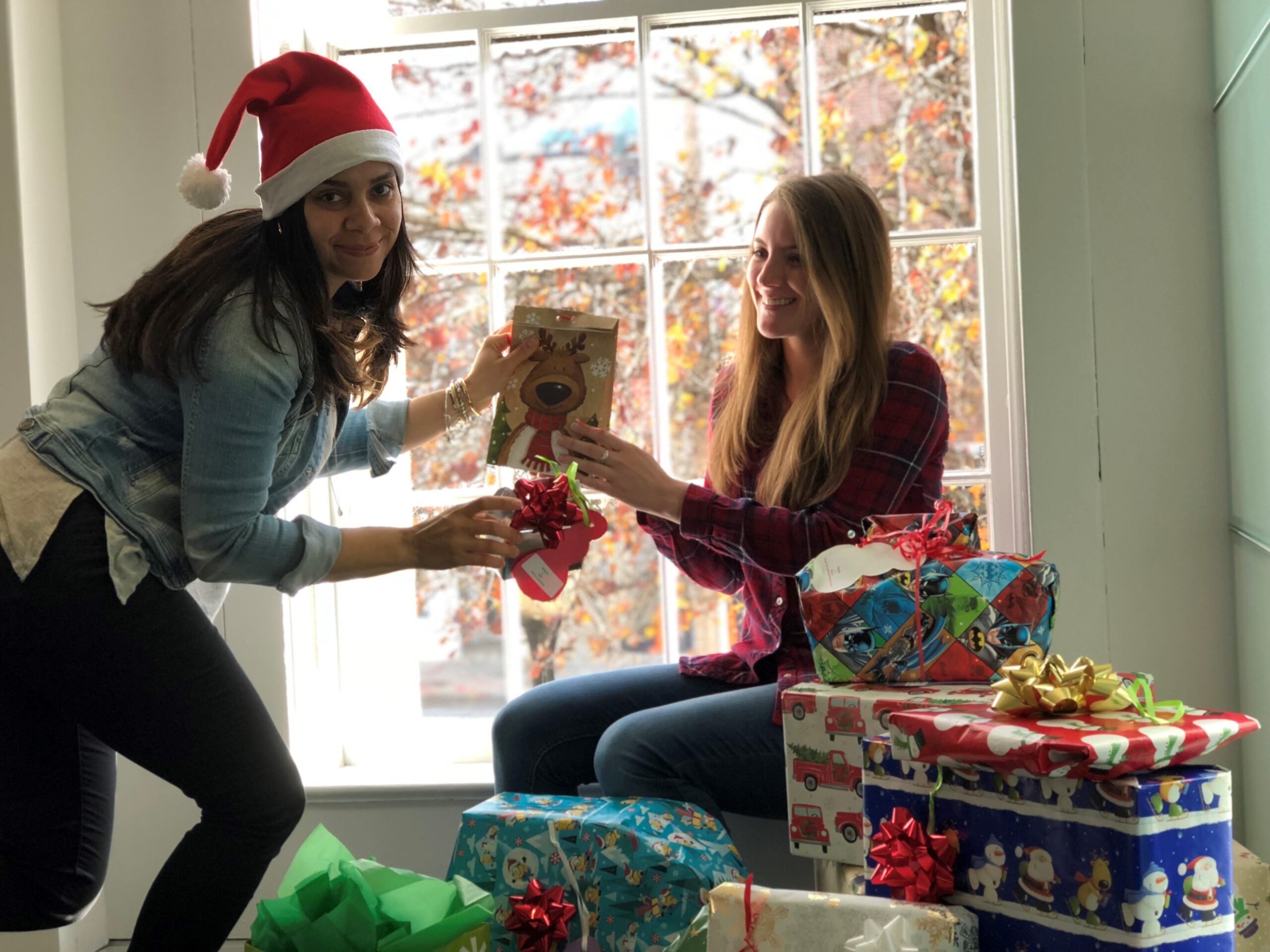 The Stamford studio “Elves” get their gifts ready to distribute to local children in need.

As the holidays approach, PEople across our studios celebrate traditions of charitable giving in the communities where they’re rooted. These traditions reflect the passions of those working in a given studio—from food and book drives to personalized gifts for children and families in need. Unusual times or not, we strive to find ways to give meaning to the season.

The late Principal Christine Schlendorf, a leader in Perkins Eastman’s K-12 Education practice, left an indelible legacy of supporting inner-city schools and children in disadvantaged areas of New York. This December—the first holiday season since her death in May—the studio is continuing a tradition she started called “Perkins Eastman Elves—Holiday Book Drive for Kids.” The studio buys and donates books to kindergarteners at the DREAM Charter Schools (both the East Harlem and Mott Haven campuses) and first and second graders at Harlem Academy. The goal is to donate 150 new books—one for each child—from the schools’ wish lists with titles ranging from Lupita Nyong’o and Vashti Harrison’s Sulwe, to Yuyi Morales’ Dreamers, to Eric Carle’s The Very Hungry Caterpillar. The studio is kicking the drive off with a wrapping party mid-December.

In addition to the book drive, our New York PEople once again competed in CANstruction, a nationwide food-can sculpture contest, sponsored in part by the AIA, that supports food kitchens across the country, including New York’s City Harvest. Our New York team dedicated this year’s food sculpture to Christine’s favorite animal, penguins. “Much like the strong family bonds shared between penguins, Christine brought together our office’s CANstruction team year after year with her CAN-do attitude and unfailing optimism,” according to a description of the project. “These penguins, separated by a river of melting glacial ice, bring attention to the urgency of the climate crisis, environmental conservancy efforts, and the importance of community action.” Like an exhibited work of art, the sculpture’s listed mediums are colorful cans of chicken stock and tuna, while plastic water bottles represent the melting ice. The team used 1,585 cans of tuna, which will feed 601 New Yorkers, according to City Harvest. In parallel, the studio is raising $3,000 to feed even more families in need as the city continues to address the effects of COVID-19, high unemployment rates, and increased food insecurity.

Stamford PEople annually purchase gifts for at-risk children in various cities throughout Connecticut to support Covenant to Care for Children. Each participating team member sponsors a child, and receives information about their age, gender, and what he or she wants for Christmas. Then they fulfill those wish lists with clothing, art supplies, educational toys, or gift cards for these children, who range in age from infant to teen. For the past two years, in response to COVID, the team has focused on food security by donating supermarket gift cards to Covenant to Care. This holiday season, our PEople raised $455 in donations to help feed local children and their families.

For the fifth year, Pittsburgh will again play Secret Santa to the local chapter of the Saint Vincent de Paul Society, which nominates families in need. Pittsburgh PEople signed up to decorate a tree with paper ornaments inscribed with the wishes of each family, and have encouraged each other to pick the ornaments and purchase the items listed on them. After a COVID-restricted break last year, the team will be reuniting this time for a gift-wrapping and pizza party at the studio before “Santa’s helpers” deliver the bundle of presents in time for Christmas Day.

DC’s Culture Club is preparing for this year’s ACE DC Gingerbread Design & Build Competition, a fundraiser for the DC affiliate of the ACE Mentor Program of America. The program is a supplementary education program designed to introduce high school students to careers in the architecture, construction, and engineering industries. “As part of our DE&I [Diversity, Equality, and Inclusion] efforts, the DC office leads a team of about fifteen mostly minority students at Dunbar High School, where the program is their first introduction to the ACE industry,” Architectural Designer Miranda Ford explained. “The ACE DC program typically has two to three hundred students across all DC-area high schools, including students of diverse genders, ethnicities, and socioeconomic backgrounds.”

The current ACE DC community includes two hundred students from seventeen schools in DC, Montgomery and Prince George’s counties in Maryland, and Arlington and Fairfax counties in Virginia. In addition, about one hundred people from a variety of affiliated companies serve as mentors to these students. This is the community that will be voting on the winners of the Gingerbread Design & Build Competition.

Perkins Eastman’s DC studio has three sponsored teams this year that will each build a gingerbread structure during a holiday happy hour on Dec. 14. There has been no extensive pre-planning; instead, the teams prefer to do quick design charrettes on the day before, working with gingerbread kits, graham crackers, frosting, and candies. (The photos below are from a previous year’s competition.) This year’s design prompts are a re-imagined school to “meet staff and student needs;” a memorial or monument; and an “eco-friendly” house. All proceeds, from both voting and registration fees, will be used to fund ACE mentor scholarships and programming along with education supplies.

The Chicago studio is organizing two holiday fundraisers this year. Our colleague Elma Milanovic leads the first, which is considerably international in scope. Elma is coordinating donations for children in need at three centers in her native Bosnia and Herzegovina. Local volunteers serving as “boots on the ground” use the money to purchase and deliver pre-packaged gifts to these centers.

The studio also set up a “giving tree” to sponsor two children through Clearbrook, an organization with more than sixty locations in the Chicagoland area that provides services to children and adults impacted by developmental and intellectual disabilities. Our PEople collected and wrapped gifts for the children to help them have a special holiday. 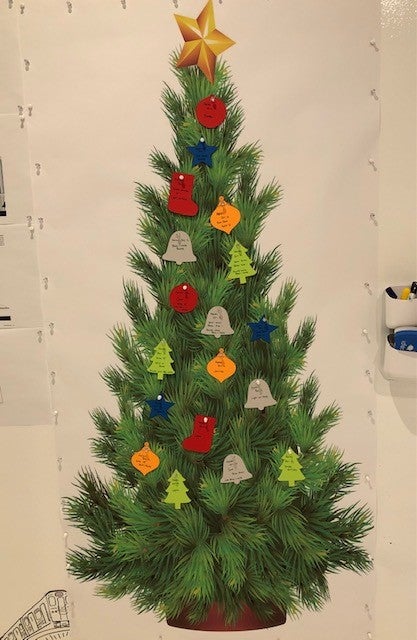 This year’s giving tree at the Chicago studio.

This December, the Charlotte team hopes to continue its participation in an event called “We Care,” which benefits the city’s Boys and Girls Club. During the design-centric event, local architecture and design studios in the area brainstorm craft ideas to make with children in the club. “We each set up a table and have all the supplies needed to make a craft,” Associate Katie Richard said. “The kids come by each table and make the crafts, which they can then give to family members as gifts for the holidays.” In 2019, Charlotte PEople helped children paint baubles; the year prior, the team helped children make snowflake ornaments based on several geometric patterns, consisting of colorful pipe cleaners and plastic beads. 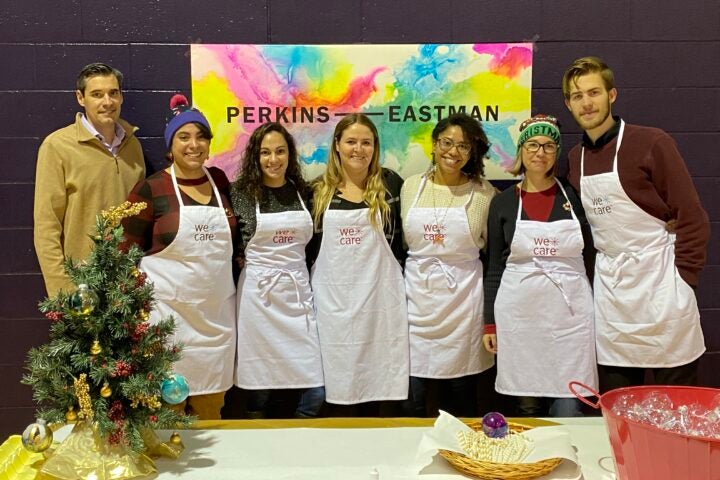 Members of the Charlotte studio pose at their holiday craft table.

For Thanksgiving, Costa Mesa Marketing Manager Melissa Mickle and Principal Betsey Olenick Dougherty arranged to donate five Thanksgiving gift baskets to Friendly Center to advance the group’s goal of feeding four hundred families a traditional Thanksgiving dinner. The non-profit is Orange County’s oldest, with a long history of helping struggling workers and their families move towards self-sufficiency. Each basket contains a $25 gift card to purchase a turkey, a box of stuffing, a can of cranberry juice, a box of dried potatoes, two cans of green beans, a can of candied yams, two cans of corn, a jar of turkey gravy, a bag of rolls, and a pumpkin pie. A collage of snapshots shows the Thanksgiving basket deliveries in 2019.

The studio also supports the Share Our Selves (SOS) Adopt-A-Family program in December. SOS shares the details of families in need with the studio, and our PEople deliver those much-needed items—such as clothing and school supplies—to each family member.

The practice of architecture inevitably involves discussions about the larger built environment, and our teams work to keep the people we design for, and the communities we design in, at the center of that practice. The giving traditions such as those shared here, which add something tangible to the lives of others, reciprocally provide meaning to the ways in which we practice. Happy holidays, all.