The Transportive Powers of a Transportation Project

The interstate highway system split countless communities in the last century; now, new infrastructure is being built to reconnect them.

This rendering of the newly opened John Lewis Memorial Bridge near Seattle depicts how it reconnects the community of Northgate, offering easy access between the light-rail station with its surrounding mixed-use development and the North Seattle College campus across the highway. With Mount Rainier in the distance, the image shows the same perspective as a photo taken in the early 1960s, when the highway was being built and Northgate was effectively bulldozed in half.

At times, transit and infrastructure—a pedestrian bridge, a bus station, a highway overpass—can go far beyond their primary use of moving people from point A to point B. All across the country, city and state governments are investing billions on projects aimed to reconnect and re-energize communities that earlier infrastructure campaigns left compromised—or worse, simply bulldozed into the ground.

Perkins Eastman, along with VIA—A Perkins Eastman Studio and its partner Donald MacDonald Bridge Architects, is working with transportation agencies and private developers from coast to coast to design some of these solutions. In the words of Perkins Eastman Principal Peter Cavaluzzi who leads the firm’s Transportation + Infrastructure practice, these projects are opportunities to move people figuratively as well as literally; they should anchor a community rather than merely offering a portal to another place.

At Minneapolis’ Target Field Station, for example, the design team proposed adding a lawn and amphitheater to the station. “We wanted to make the transit experience theatrical,” Cavaluzzi says. So much so that when the musician Prince died in 2016, hundreds of people spontaneously gathered in the space as his movie “Purple Rain” streamed on the big screen. “It was totally gratifying for us to see that something we created became this beloved ‘town square’ and meeting place for the community.” 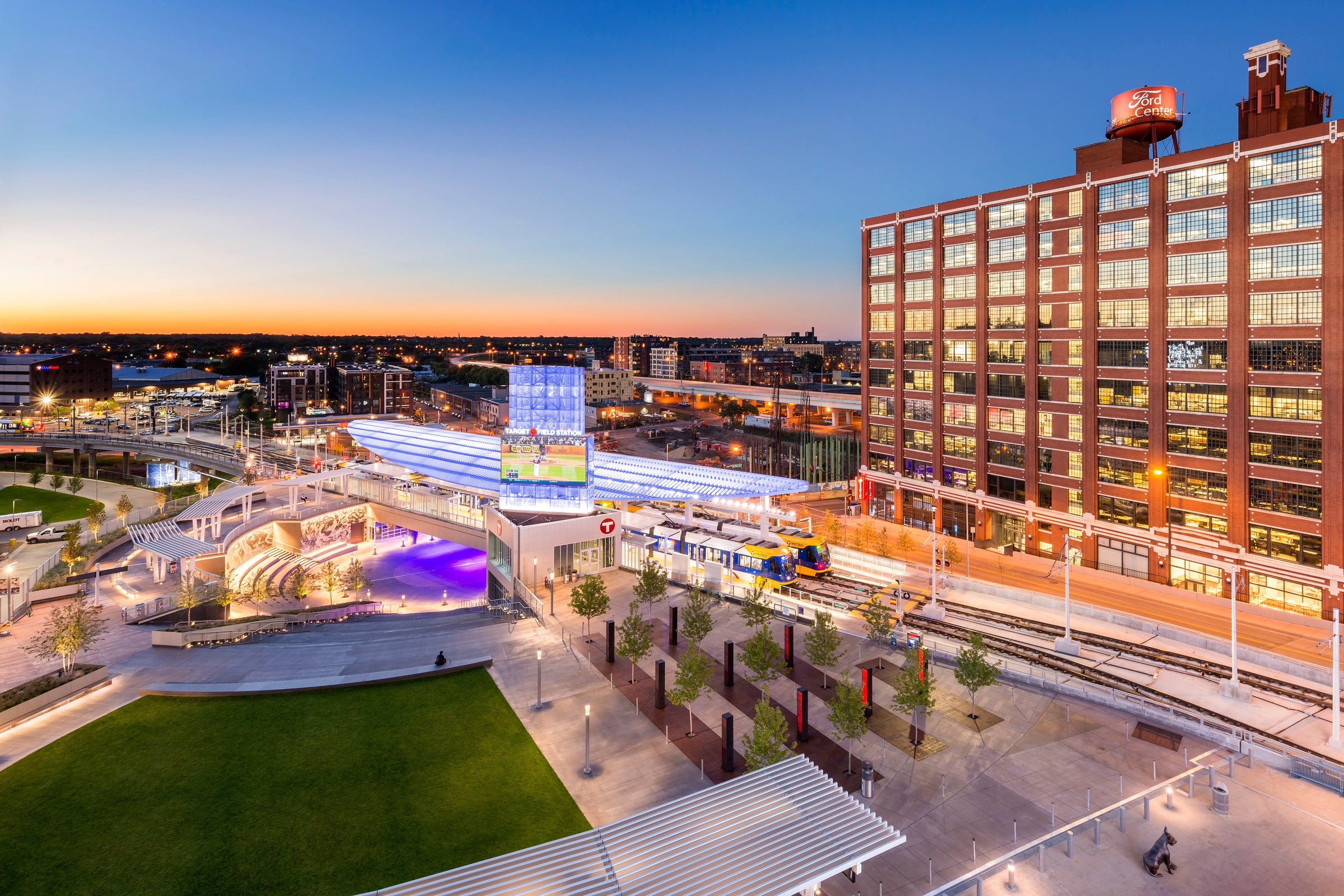 Cavaluzzi’s approach, along with that of his like-minded colleagues at VIA—A Perkins Eastman Studio and Donald MacDonald, takes on more significance in areas that were torn apart when the Federal-Aid Highway Act of 1956 brought 41,000 miles of asphalt across the country, according to an NBC report, displacing over 475,000 households and one million people in the process. Here’s a look at some projects that seek to redress those divisions.

“The arch is a universal symbol of arrival and connection.”
—Peter Cavaluzzi

The Lake Street community outside Minneapolis stood in the way of Interstate 35 as the massive freeway was being constructed from Duluth to the north down through the Midwest to Laredo, Texas, in 1956. An eight-lane highway suddenly bisected a thriving boulevard that stretched from Lake Minnetonka to St. Paul. The artery’s low overpass cast the Lake Street-2nd Avenue intersection in a permanent, gloomy shadow. “If you walked under this bridge, it was always dark and dreary,” Metropolitan Council Member Robert Lilligren says. And a bus stop at the highway’s edge, only reachable via steep concrete steps, would ice over in the winter. “I used to use the transit station here at Lake and 35 West, and it was treacherous to climb up those steps to get to the bus stop. You stood on the shoulder of the freeway feeling like cars were coming right at you,” Lilligren says. His comments were part of a video produced at the opening of the new Perkins Eastman-designed Lake Street Station in October. He stood in the atrium of the glass-enclosed, two-story structure that comes up into the middle of the highway, providing safe passage for bus commuters on the METRO Orange Line in and out of downtown. The station also provides cyclists and pedestrians with a safe connection to the nearby Greenway Crescent trail that heads into midtown. 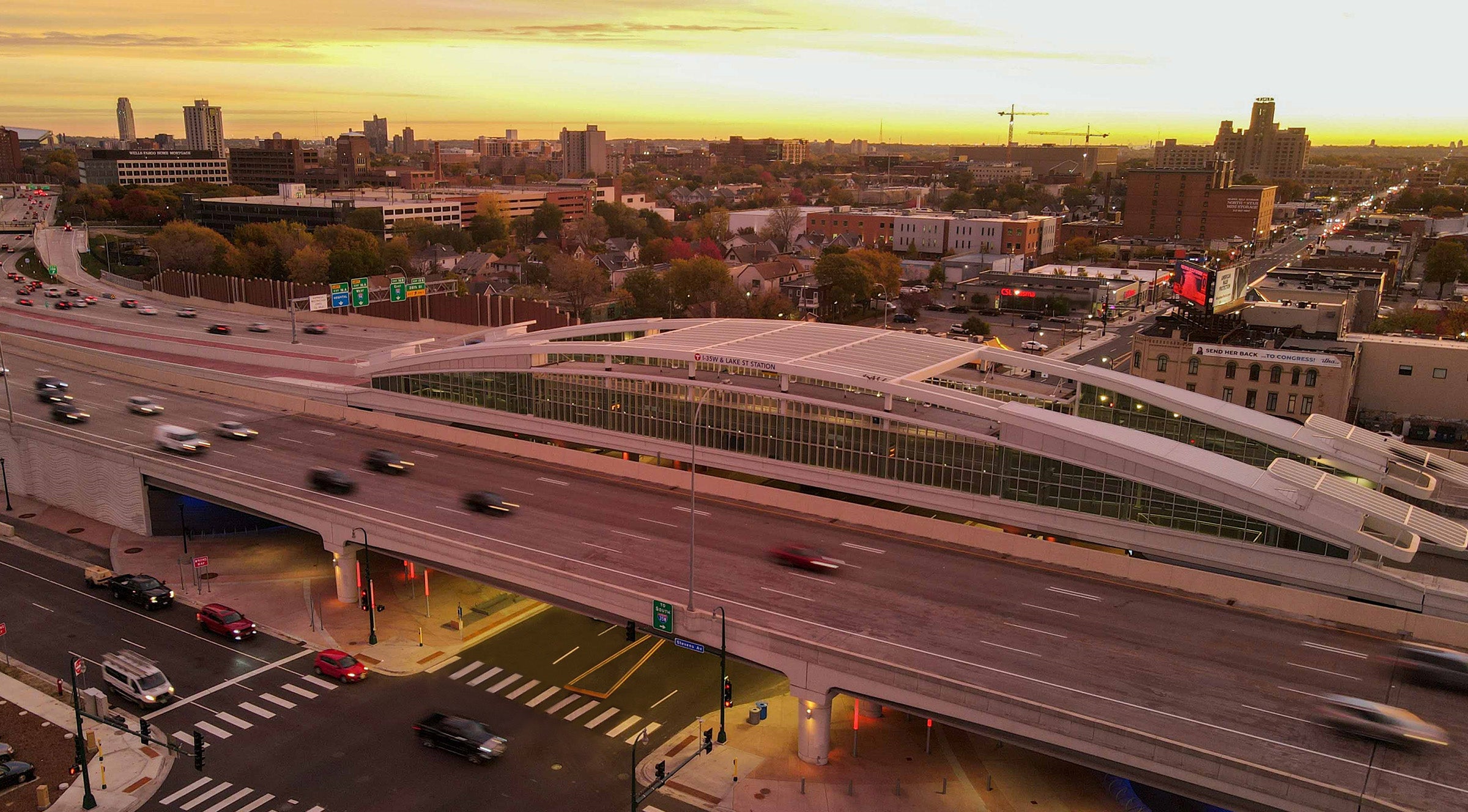 The new Lake Street Station offers glass-enclosed plazas underneath the highway that rise up into protected bus zones where passengers can safely board buses and where buses can safely pull away from the traffic flow of Interstate 35W. Courtesy Metro Transit Minneapolis

Cavaluzzi’s team was keenly aware of the damage 35 West inflicted on this diverse and working-class community. As they sought to make this station—and intersection—lighter, brighter, and more welcoming, Cavaluzzi says he was inspired by the gently arched bridges that unite the banks of the Seine River in Paris. “The arch is a universal symbol of arrival and connection,” he says. 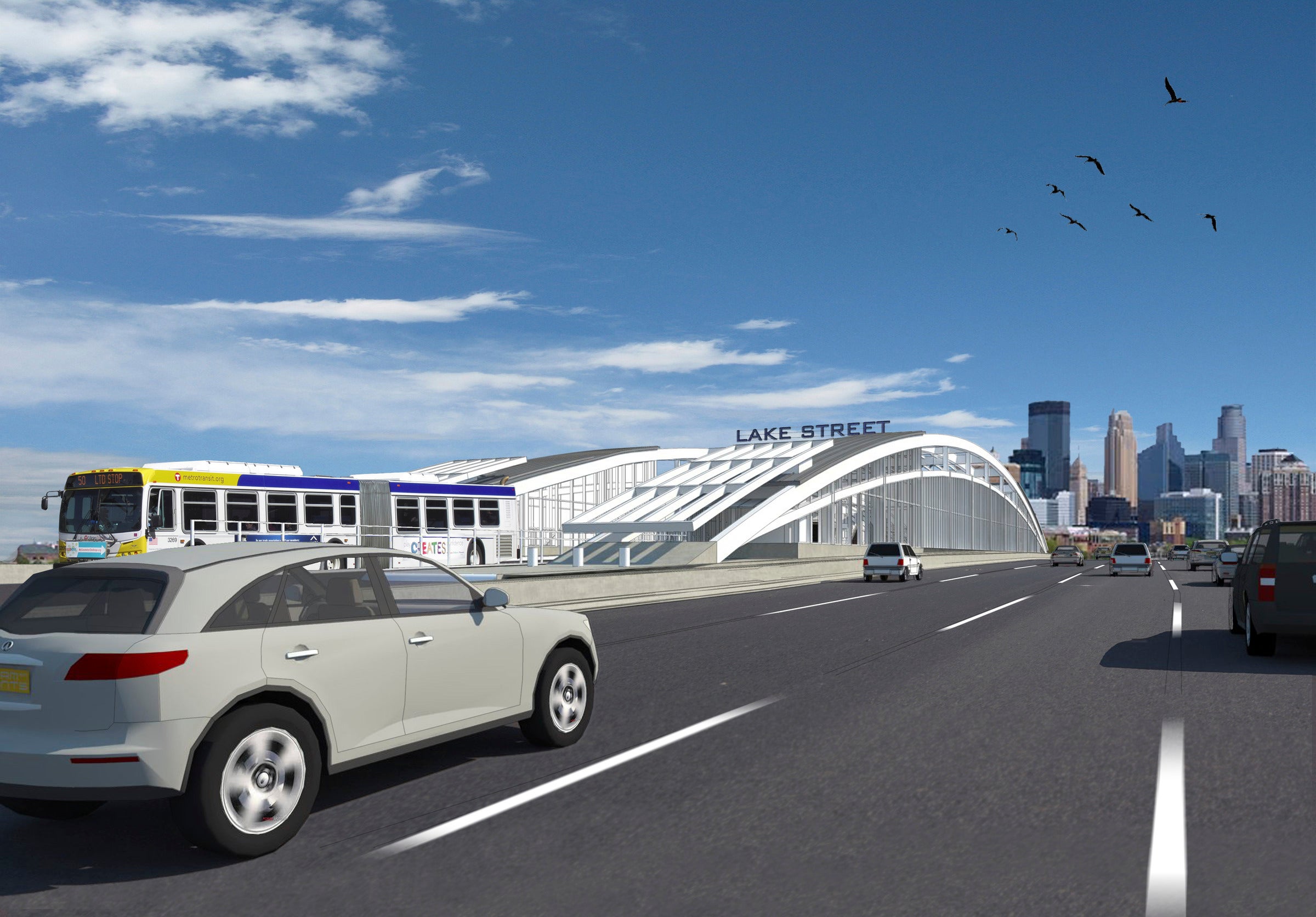 The arching canopy over the Lake Street Station in Minneapolis is meant to invoke bridges that gracefully cross the Seine River in Paris.

The “long, low arch” of the station’s canopy in particular, he adds, is a reference to the elegant Pont Alexandre III, which lies at the intersection of the city’s most prominent public gardens. Likewise, the Lake Street station’s siting was critical: “We focused the big picture windows so they would take advantage of the beautiful skyline and Lake Street views,” Cavaluzzi says, the intention being that this new development can invite future improvements in an area that has the highest residential density of any location along I-35W, according to Metro Transit. “The larger goal was to create a landmark and a gateway to join communities,” Cavaluzzi adds.

“It’s about understanding how we can … bring some life and vitality back to these communities.”—Eric Birkhauser

The Seattle Times published a story in 2016 headlined, “These 7 photos reveal how I-5 construction tore through old Seattle.” The second image shows Northlake with a muddy gash charging through the middle of its tree-lined community toward downtown Seattle, juxtaposed against a lovely Mount Rainier rising in the distance. “These photos from our archive show how neighborhoods were obliterated by the Seattle Freeway construction” in the early 1960s, the story says. Sixty years later in October, 2021, the John Lewis Memorial Bridge opened to cyclists, wheelchair users, and pedestrians, connecting the Northgate light-rail station to North Seattle College across the highway, and providing a lookout point over the Barton Woods wetlands that lie adjacent to the campus. Meanwhile, a number of mixed-use developments are coming up next to the rail station, anchored by the new training facility for the Seattle Kraken hockey team.

The freeway “was done in a very careless and brutal manner. It created this huge chasm through Seattle” in predominantly minority communities, says Eric Birkhauser, a principal at VIA—A Perkins Eastman studio, who with Senior Associate Emily Perchlik led the bridge design. It provides direct access between Northgate’s educational, environmental, transportation, retail, and sports destinations. “It’s a game changer,” Birkhauser says. John Lewis is among many new pedestrian bridges that are starting to stretch across the canyon that I-5 created through Seattle’s metropolitan area. There is also a movement to place a “lid” of green space and development over the highway’s downtown sections—another project with which VIA is involved. “It’s about understanding how we can heal these big divides and bring some life and vitality back to these communities,” Birkhauser says. In Northgate, VIA worked with the local transit agency and multiple community groups over several years to gather input for the bridge’s design. Its path gently slopes up around the rail station and then crosses into the college campus. The primary span over the highway features a “mountain peak” design that invokes the region’s mountainous profile as cars flow under it toward the city. Motion sensors and a kinetic art installation also create waves of light that animate the new connection. 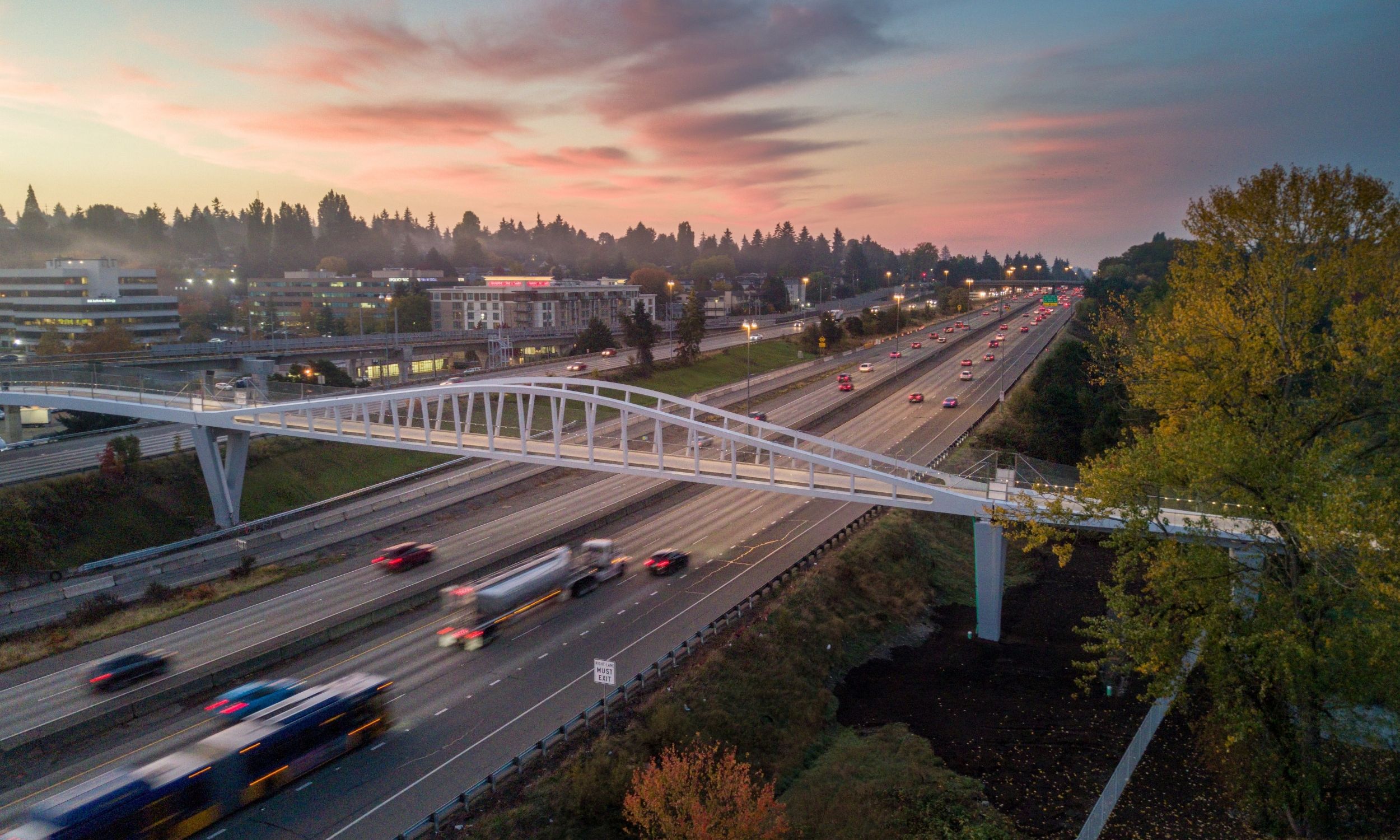 The John Lewis Memorial Bridge begins to light up at dusk, illuminating its “mountain peak” design in the middle.
An outlook platform (at right) allows people to enjoy the Barton Woods wetlands.
Courtesy David Evans Engineering

The project includes a protected lane on the rail-station side that flows into an existing network of pedestrian and bike trails. “It opens up walking and biking access to a whole section of the city that was previously completely closed off from Northgate,” a cyclist said in a video filmed on the bridge’s opening day. Lee Lambert, executive director of the Cascade Bicycle Club, was also quoted: “A huge reason this bridge exists is because people spoke up, organized, and demanded something more for their community.”

“It had to be, in my mind, the centerpiece of Miami.”—Donald MacDonald

Miami’s Overtown neighborhood was once known as “Harlem of the South,” a cultural destination for African Americans throughout the first half of the 20th century. But in what’s become a frustratingly similar narrative played out in dozens of other minority neighborhoods like Northgate and Lake Street during the 1950s and ’60s, the music stopped in Overtown when the interstate came through. I-395 created “a blighted, disconnected no-man’s land of oppressively low overpasses and closely spaced columns,” according to The Miami Herald, banishing sunlight from the center of a community whose clubs hosted the likes of Louis Armstrong, Billie Holiday, and Nat King Cole.

Now, the entire region is undergoing a massive reconstruction of 395 and portions of other intersecting highways, while Overtown is enjoying a renaissance of increased investment and development. The newly built 395 will still flow above it, but the deck is being lifted from fourteen feet to sixty feet, the height of a five-story building; its lanes will flow over two spans instead of one; and the number of support columns is being reduced by three quarters—all of which will send much more sunlight down into the neighborhood. Donald MacDonald’s firm was chosen from a large field of competition to design this new section, to be capped at the nearby edge of Biscayne Bay with six massive arches intended to resemble a giant fountain. 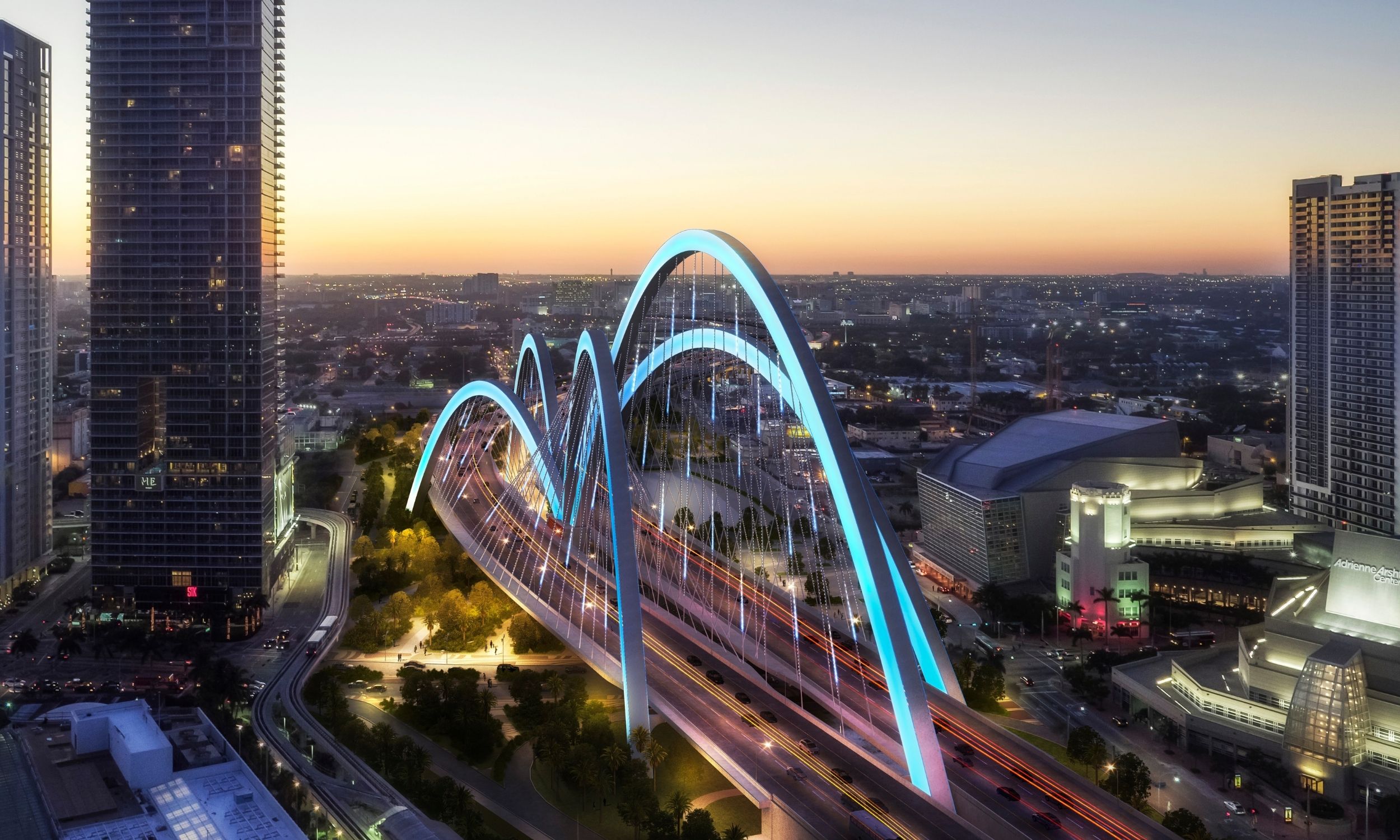 The Fountain Bridge, seen in this rendering heading west from Biscayne Bay, is flanked by notable architecture.
Cesar Pelli’s design for the Adrienne Arsht Center for the Performing Arts stands to its right, while at left (not shown) is
Zaha Hadid’s One Thousand Museum residential tower.

Starting with the Spanish influences across the city, MacDonald found inspiration for the design from the multi-tiered cascades of water at an iconic fountain in Malaga, Spain. The international airline flight patterns centered over Miami—often referred to as the center of the Americas—were further sources of inspiration. MacDonald also wanted to invoke the shooting sprays from the city’s fireboats during times of celebration. “It had to be, in my mind, the centerpiece of Miami,” MacDonald says. The bridge will feature rhythmic “splashes” of LED light along the arches and down the support cables, channeling the feel of a real fountain. “It’s hard to do bridges that are far out of the mode,” MacDonald says, but he pointed to major architectural works flanking this project such as a strikingly bold residential tower by the late Zaha Hadid. “I felt that in Miami, if Zaha Hadid could do that building, I could do something beyond.”

The project is expected to be completed in 2024. Along with it, another firm is designing fifty-five acres of green space underneath the highway. The new “Underdeck” will be the largest urban park in the city of Miami—and an attempt to reinforce the community connections that are already underway with an influx of business, residential, and retail development. “The city’s hoping this park could be a transition area where that could happen,” MacDonald says. 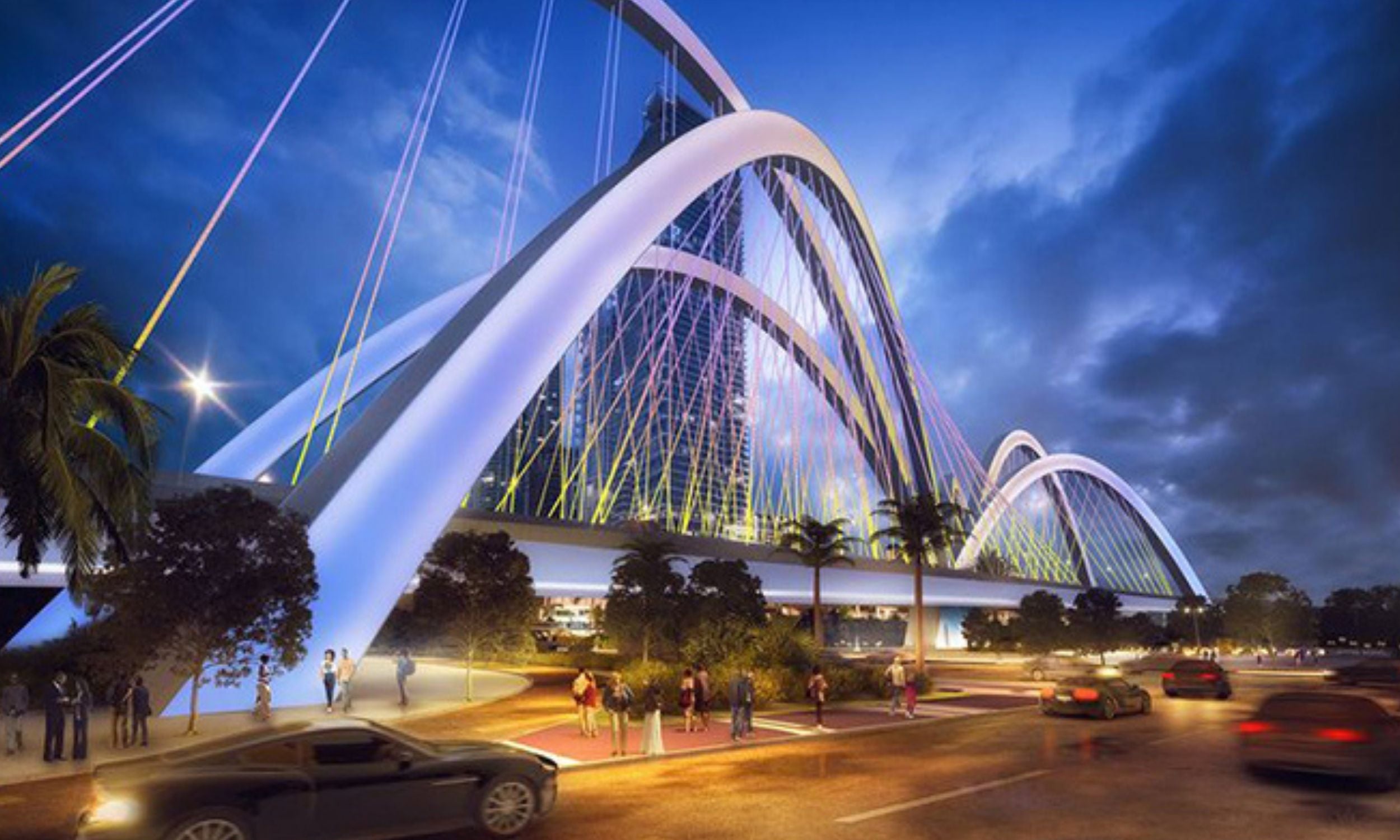 A fifty-five-acre urban park, the biggest in the city of Miami, is being planned underneath the Fountain Bridge portion of a rebuilt Interstate 395.

Though the new construction and the accompanying park have brought mixed reactions from longtime residents, MacDonald is hoping his Fountain Bridge design will introduce a new perspective to the area—that of a crown atop an important historical section of Miami, rather than a pass-through that covers it up. The new theme, Birkhauser says, is that bridges serve people, not cars: “It’s about healing these wounds that infrastructure has created.”