At the core of the Perkins Eastman Sport team of architects and planners is a creative “what if” approach to the places where sports occur. While most sport projects and clients are focused on and specific to their project needs, vision, and goals, the PE Sport team was able to make use of some down time during the COVID pandemic to think about what we would do as designers—just because, and, you know, what if?

The PE Sport team decided, unsolicited, to explore some “what if” possibilities at two B1G Conference institutions – Rutgers and Northwestern universities. PE has been involved at Rutgers University as one of that institution’s trusted advisors, and has helped to plan and design many of its athletic facilities—including the Marco Battaglia Football Practice Complex and the RWJBarnabas Health Athletic Performance Center—since they joined the B1G Academic Alliance in 2014. Additionally, PE has always had a soft spot for Chicago and the family lineage of Co-Founder and Chairman Brad Perkins, who grew up in Evanston—within walking distance of Northwestern’s campus.

Working independently and without interaction from either Rutgers or Northwestern, the PE Sport team explored what might be, what could be, and “what if” each university’s stadium lived up to its past and future potential.

Specifically, the design team envisioned what Northwestern’s Ryan Field and Rutgers’ SHI Stadium might look like with hypothetical, transformational additions. Digital models of each stadium and their environs were constructed and teams explored their history, tradition, and context. The goal of the investigation was to develop and explore a singular, transformational addition sensitive to each stadium’s history, contextual setting, and stadia best practices.

Now that college football season is in full swing, let’s take a look: 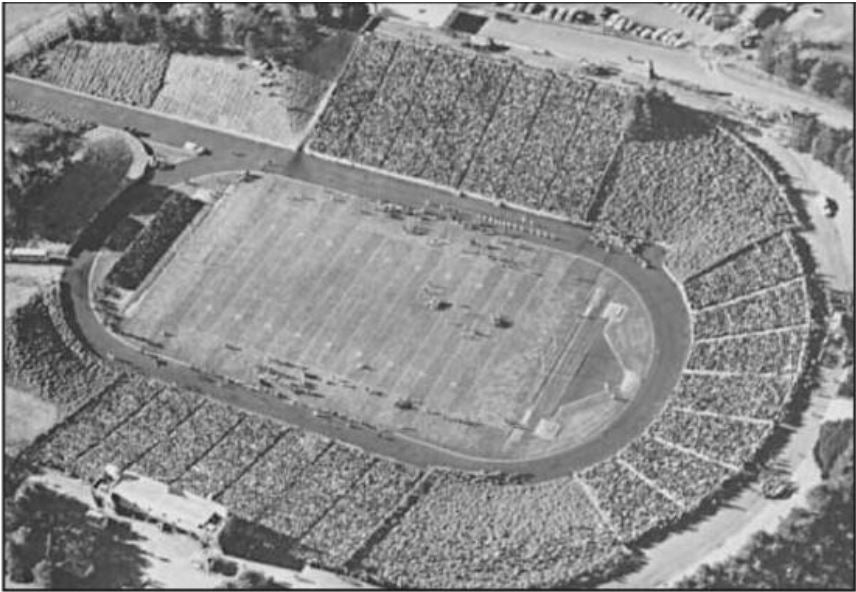 Constructed out of the WPA program and opening in 1938, what is now SHI Stadium was envisioned as a single-level, horseshoe-shaped bowl carved into the Piscataway landscape overlooking the Raritan River. Over time, renovations and additions to the stadium have built up above and over the 1938 grounds with upper decks on the sidelines and enclosing the lower bowl in the south end zone in 2009. SHI Stadium anchors the southern end of the Busch Campus, and the Perkins Eastman “What if” concept not only completes the stadium upper deck to reconnect the visual access to the Raritan River but also provides an urbanistic terminus to Scarlet Knight Way at Athlete’s Glen, the forecourt to SHI Stadium.

Here’s what it looks like today, looking north toward Athlete’s Glen: 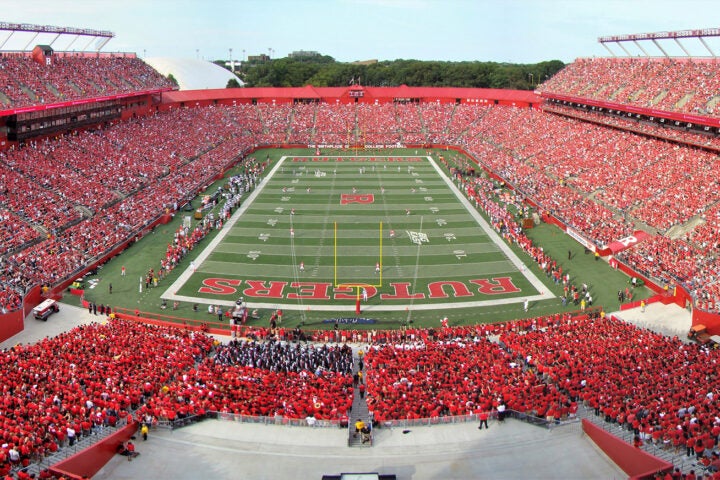 The transformational renovations envision the addition of approximately 10,000 seats to the stadium capacity through a range of seating and premium hospitality possibilities, including party terraces, field boxes, a lower bowl club, a variety of lower and upper bowl suites, lounges, and spectator amenities that support the latest, in-game hospitality. The new North End Zone addition is envisioned also to include classroom, office, and lecture spaces for year-round, non-game day use to support Rutgers academics—all overlooking Athlete’s Glen. A 45’ x 150’ LED board, putting Rutgers in the top-10 of college football scoreboards, sits atop the new addition.

Move the slider below to see the transformation take place: 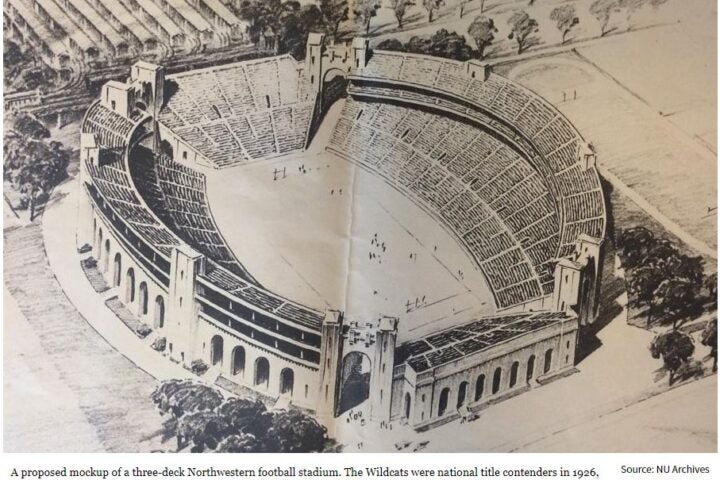 Originally named Dyche Stadium and opened in 1926 for a program that was a budding dynasty, plans envisioned a three-tier stadium for 80,000 that would have rivaled any in sport at the time. However, the scope and capacity were scaled back, and the stadium—and program—never lived up to this vision. The Perkins Eastman “What if” concept is derived from the unique second curved upper deck that never was built. 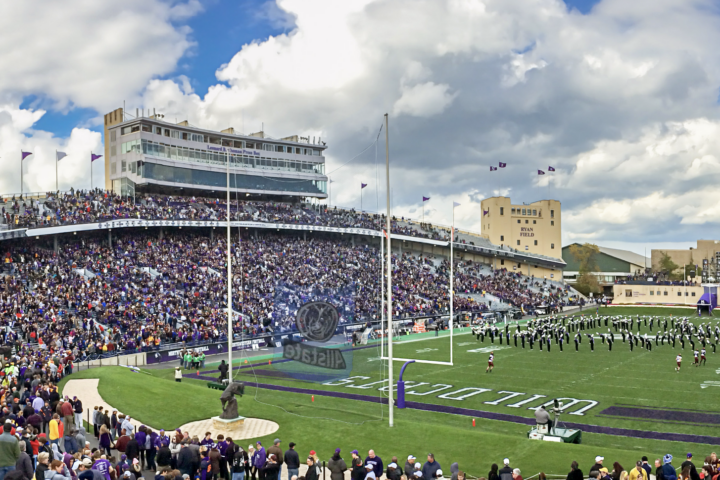 Brad Perkins grew up within walking distance of Ryan Field, where he attended many games in the 1950s with his older brother. Brad’s fondness for views of and sailing on Lake Michigan is the inspiration for the Perkins Eastman concept, which encloses this imagined second upper deck with a mixture of premium hospitality suites, clubs, press/media, and hospitality and amenity spaces.

A central, two-story “ballroom” is envisioned within to overlook the field and Lake Michigan, providing a unique game-day experience and flexibility for non-game day event use. Flanked by two-levels of club, suite, and loge premium hospitality spaces, the addition provides a Northwestern University-exclusive view and experience. Premium outdoor seating underneath the “third tier” provides direct connection to the elements and is supported by club and hospitality spaces within.

Move the slider below to see the transformation take place:

Now that fans are heading back to their alma maters to watch their favorite teams on the gridiron, it’s worth examining how this nostalgic experience could be that much better.