Honoring the Military Through Design

As Americans plan ceremonies, shows, picnics, and parades across the nation to honor our service members throughout Military Appreciation Month each May, it’s worth asking: How do we go beyond the pomp to sew tribute and recognition for the armed forces into the fabric of daily life? For Perkins Eastman, the answer is a matter of building it into the design. That commitment is playing out across two projects the firm has undertaken for the military—one under construction, another recently completed—where the job has become deeply personal for each team.

Perhaps no one was better suited to work on a commission for the U.S. Naval Academy than Perkins Eastman Associate Ben Scarbro. His grandfather was a Navy submariner during World War II; his parents met in the Navy’s Anti-Submarine Warfare School, Key West; his father taught at the Naval Academy and coached its baseball team; and his brother is an academy graduate, Naval Flight Officer, and TOPGUN graduate, who will also begin teaching at Annapolis in a few years. When Perkins Eastman was commissioned to design a new building off the Severn River for the academy’s alumni association, “I was basically waving my hands” to join the team, says Scarbro, who grew up less than two miles from the site. With such deep family ties to Annapolis and the Navy, Project Manager and Perkins Eastman Associate Principal Jason Abbey says Scarbro was a natural to craft a design that would properly honor the academy’s graduates. 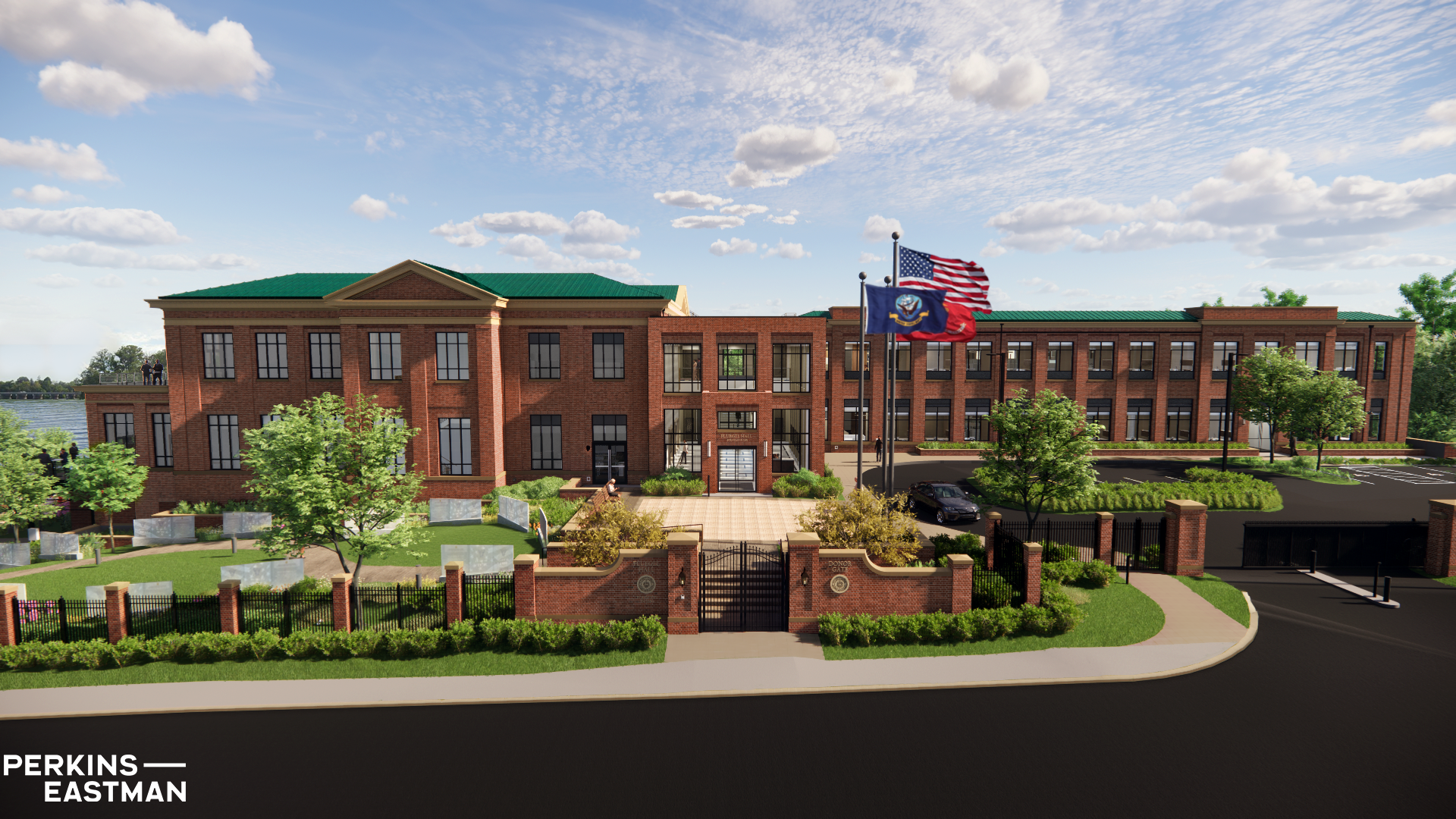 A rendering of the U.S. Naval Academy Alumni Association & Foundation, to be completed in the summer of 2023.

“A lot of my design intent was pulling the alumni association back to the academy—how can we tie the emotion and the feeling into reminding people of their time at the academy?” Scarbro says. It starts the moment they walk through the door. A double-height lobby stretches from front to back, where a wide stair goes up a half-story to face a curtain wall of windows with views of the same creek the academy resides on. 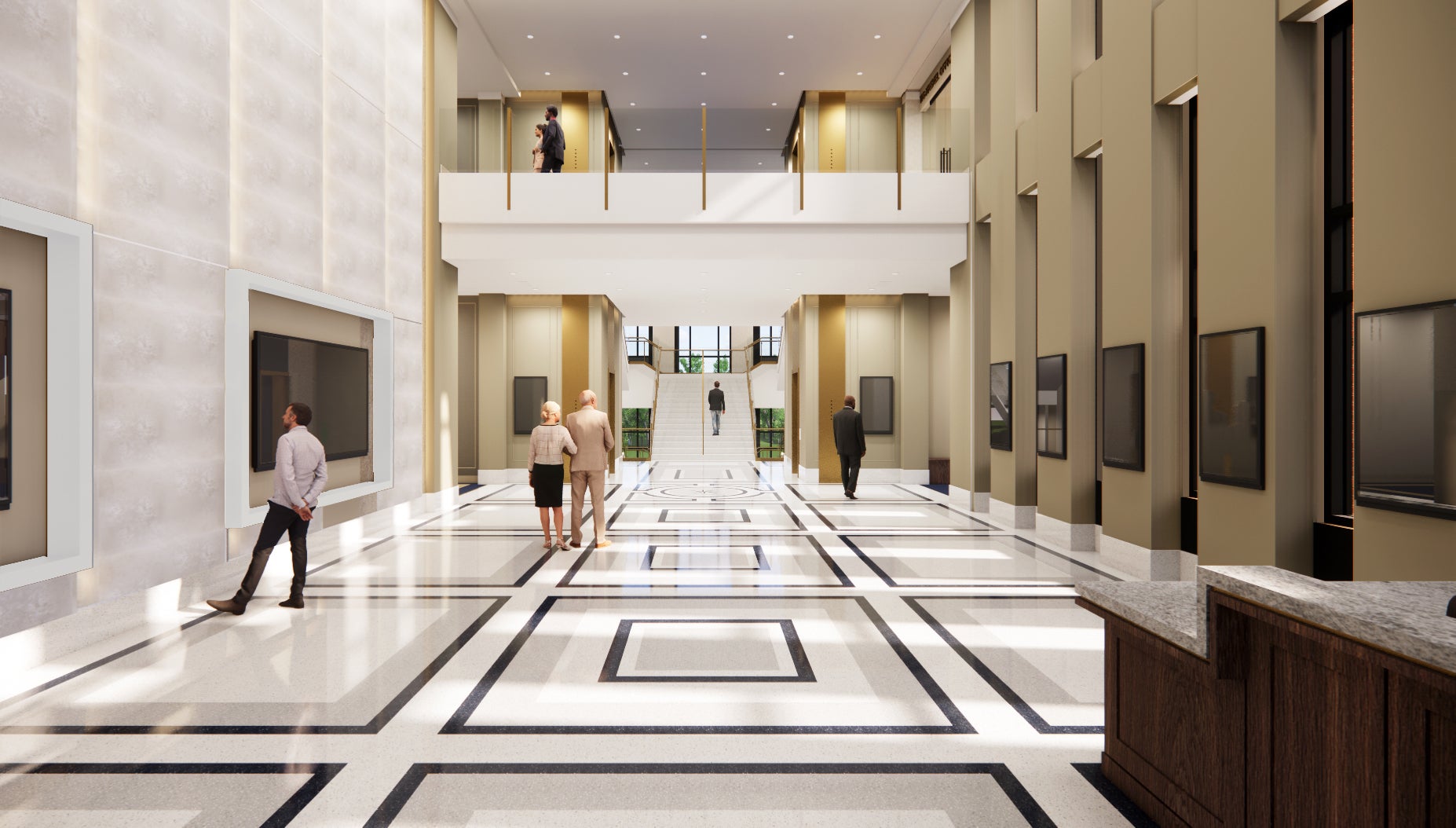 The alumni association’s main lobby will pay homage to its alumni with both still and video images along the walls, which lead to a stair that channels the approach to Memorial Hall on the Naval Academy campus.

Though the stair will feature modern glass rails and terrazzo risers, there’s no mistaking its historic inspiration: “Every mid[shipman] would recognize the stair configuration we did as a nod to Memorial Hall,” Scarbro says, referring to the grand chamber honoring academy graduates who died in the line of duty. Its entry stands at the top of a half-flight of limestone steps from the lobby of the campus’s storied Bancroft Hall. 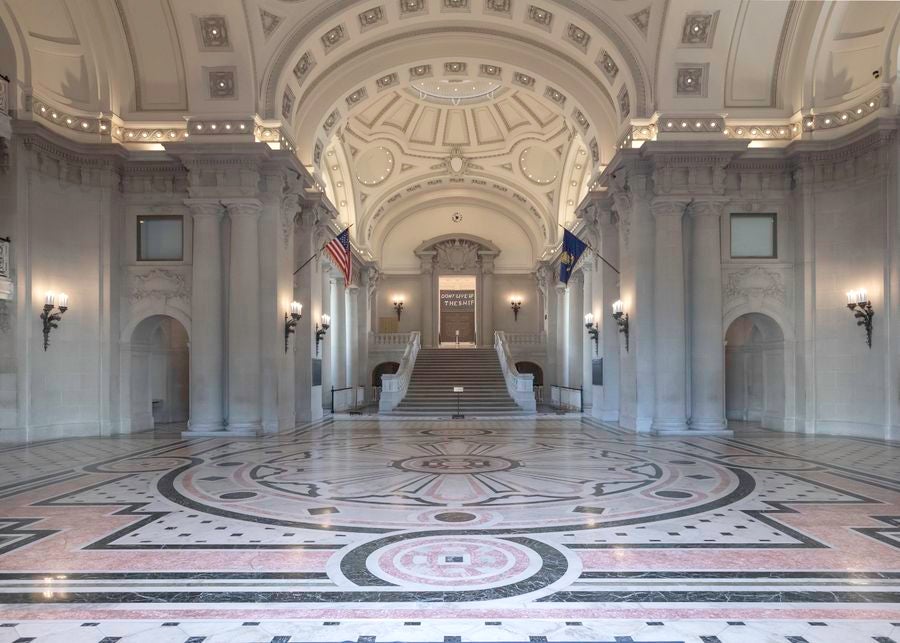 Bancroft Hall Lobby with steps up to Memorial Hall. Photograph courtesy of the U.S. Naval Academy

“Highlighting History and Honor” was the Perkins Eastman team’s guiding theme, a sort of mission statement that was referenced on every presentation during the design development. The entry stair anchors a lobby that will feature both still-image and video tributes to alumni – “We wanted to create a moment of remembrance for those who enter the building,” Scarbro says, adding that the lobby’s axis lines up with the campus grid across the water. 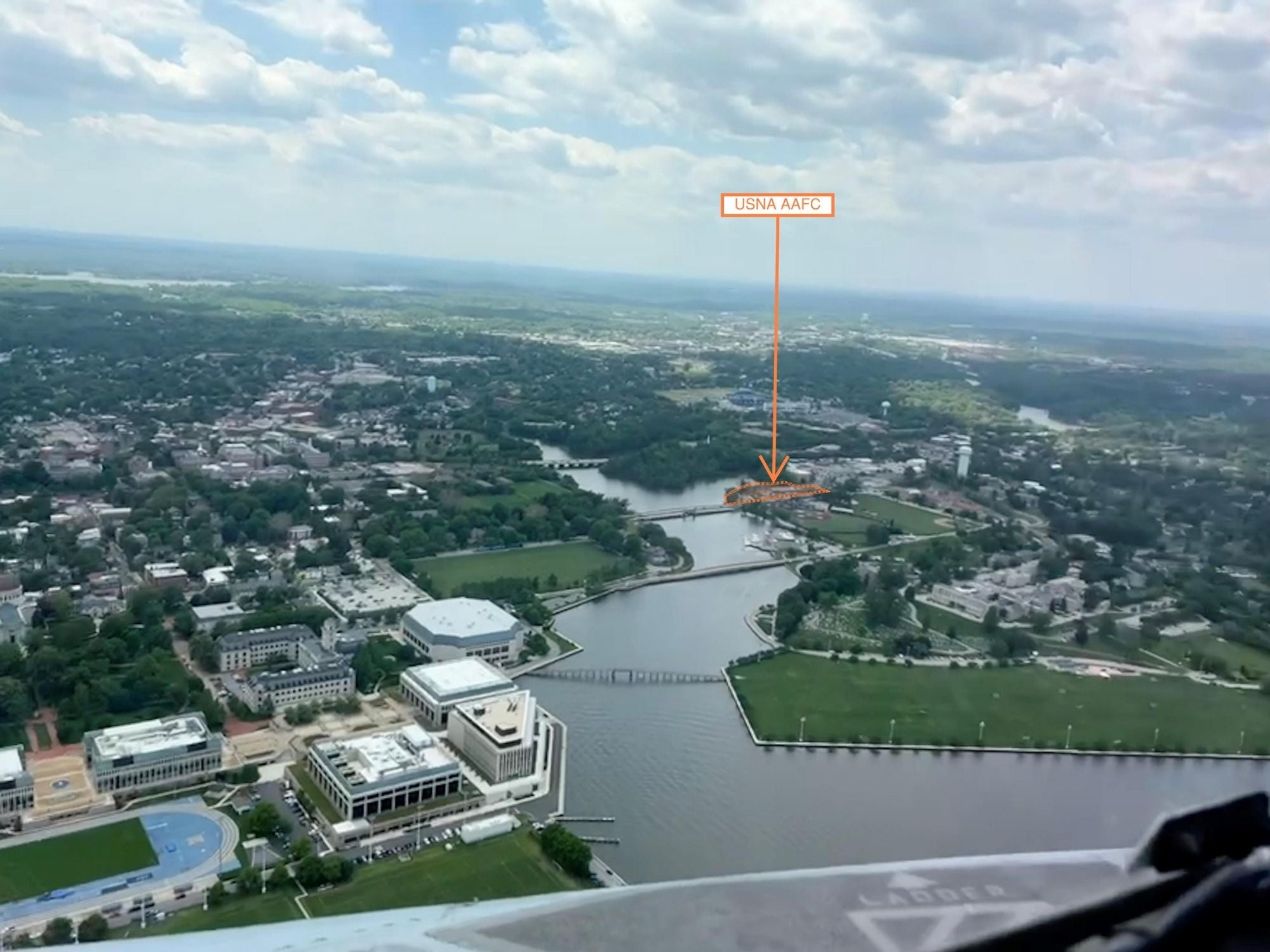 Organizationally, it divides the structure, with offices for the U.S. Naval Academy Alumni Association & Foundation stretching out to the right, and event and meeting space to the left, which is surrounded by multiple outdoor terraces and decks. 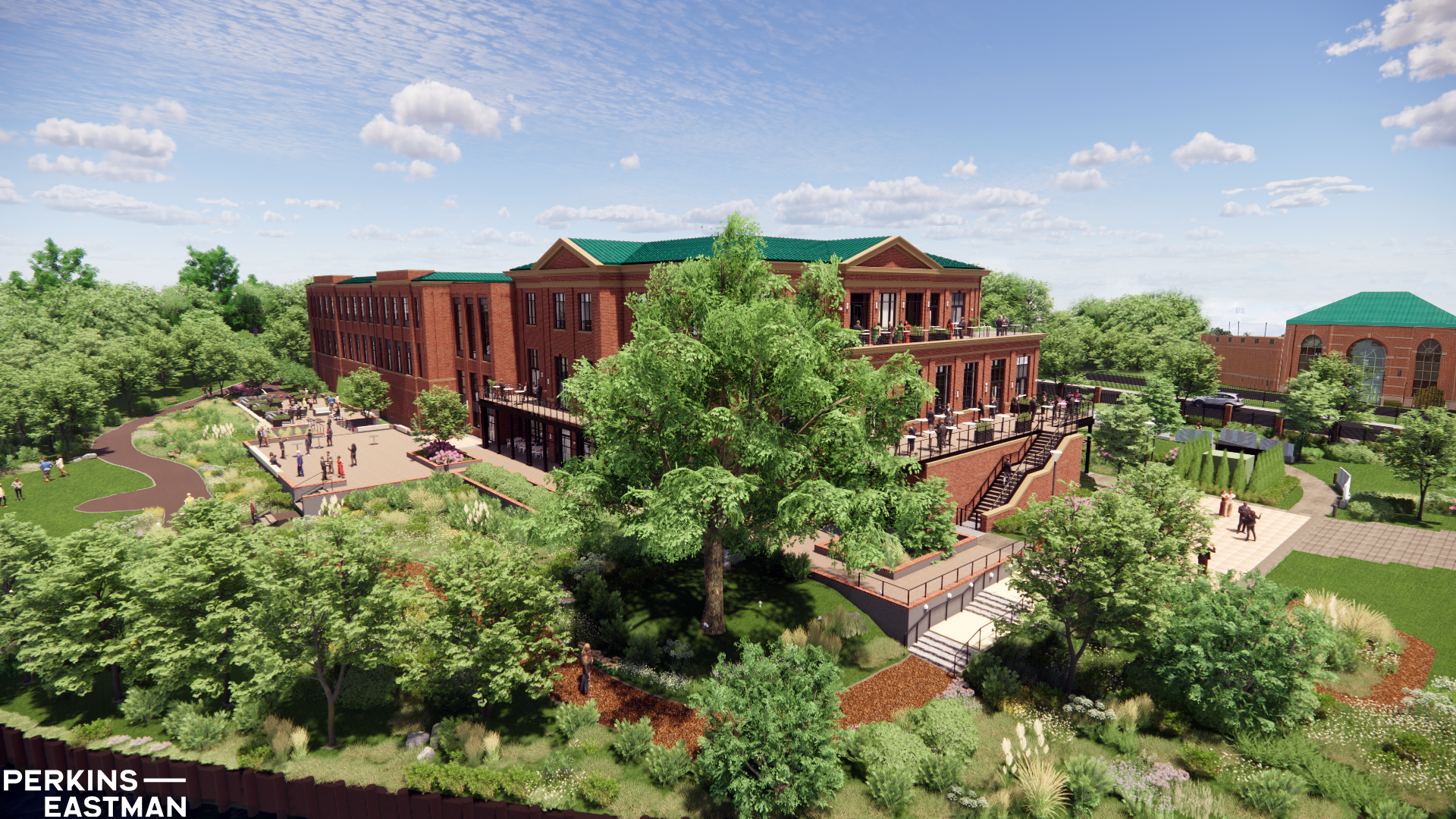 Every level of the alumni association’s event wing steps out to a deck or terrace facing the water.
The building, seen here from the rear, stands across the street from the academy’s baseball stadium, far right.

For the first time, the new building will allow the association to hold large events for its alumni. It will feature banquet rooms that can easily be converted into lecture and training halls on the first and second levels and a lower-level bar and lounge—all of them with access to the outdoors.

The building is designed to have flexible spaces that can serve many purposes, like this main-level event space above that can easily convert from banquet/ballroom to lecture hall.

The alumni association currently occupies a compound of five small buildings, with the main one dating back to 1739, says Commander Craig Washington, the association’s executive vice president for engagement and communications. “The rooms are just too small to host even a decent-sized dinner,” he says. “We’ve never been able to host large groups of our alumni at the Alumni House.” The offices, furthermore, are much too small to accommodate the association’s growing fundraising and development activities. The new building, on the other hand, will have two expansive floors of offices and conference rooms. 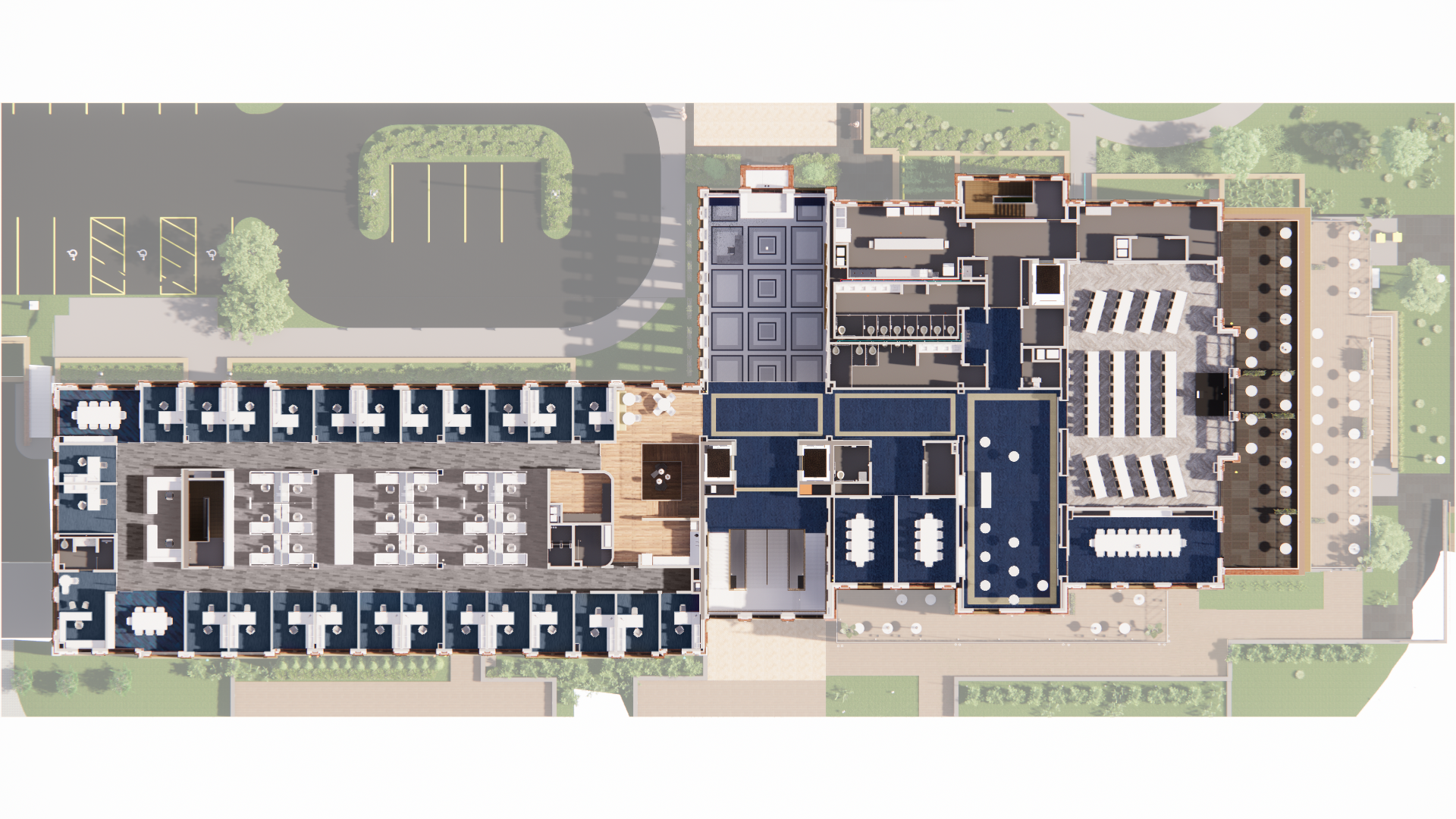 A plan of the second level shows the office wing at left, with its own set of stairs down to the main floor.

The structure, on track to be completed around June of next year, culminates ten years of planning and millions of dollars in fundraising from its “very passionate” alumni, says Washington, who counts himself and his two sons among them. Every space in the building bears the name of a donor, in addition to glass-etched panels in the front garden that list classes who’ve collectively given to the effort. “It’s definitely personal” to every alum who will return to the academy, and Perkins Eastman took that to heart in its design, Washington says. “They were very thoughtful. It’s more than just an office building. It’s going to have features in it that make it more like a memorial.”

That was the goal, says Abbey, the team’s project manager. Noting that one hundred percent of the academy’s graduates go on to serve in the Navy, he said the team endeavored to design a structure that would embrace their dedication and commitment. “There’s a good deal more care taken and deference to their graduates and their service to our country,” he says. “That raises the floor for everyone.”

“The USO Great Lakes Center is the place to be when you’re not at work, and when you’re not at home,” says Christopher Schmidt, executive director of USO Illinois. For service members stationed at the Naval Station Great Lakes just north of Chicago, this 15,000 sf second-floor space in a century-old building is a place of rest, recreation, and comfort for sailors—both students assigned to Naval Station Great Lakes and those charged with their training—and all of their families. 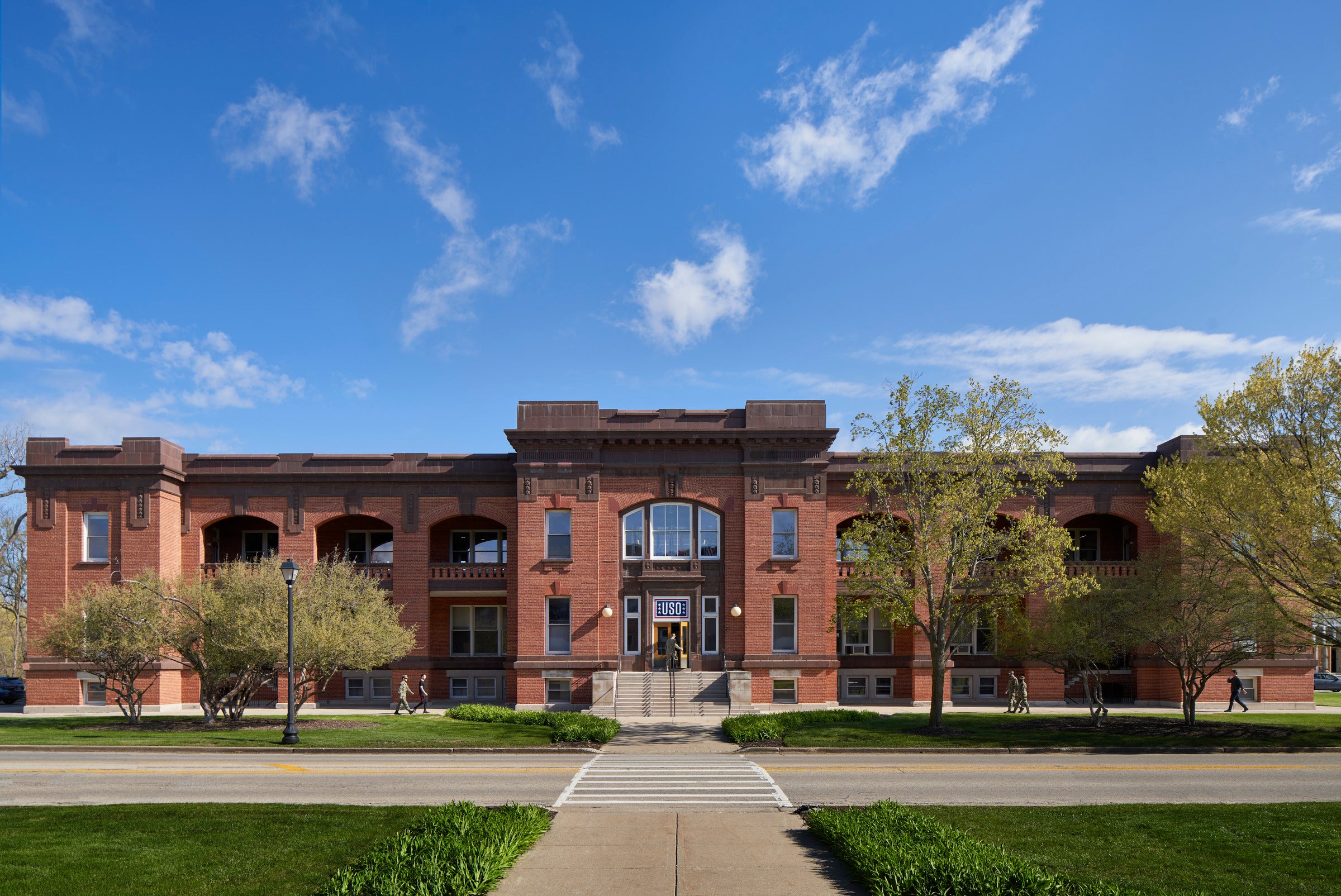 USO Great Lakes is a flagship USO center and one of the largest USO facilities in the United States.
Copyright Andrew Bruah/ Courtesy Perkins Eastman

Perkins Eastman, which recently completed a pro-bono interior-design refresh of the USO lounge at Chicago’s Midway Airport, was tasked with overhauling USO Great Lakes’ choppy layout and dated interiors.  Project Manager Madona Cumar-Malhotra quickly adopted the language of home as her team interviewed the myriad stakeholders. “In every conversation, we heard the word ‘home’ come up. The outdated space cried to be the home it was always meant to be. All we had to do was listen and let the space lead us,” says Cumar-Malhotra. “This was not simply an amenity space. We always called it their home.”

And just like the kitchen is the heart of any home, the café area—where companies sponsor free monthly “no dough” dinners for anyone on base, and where volunteers prepare and serve Sunday brunch—is at the center of the USO layout, just inside the entry. 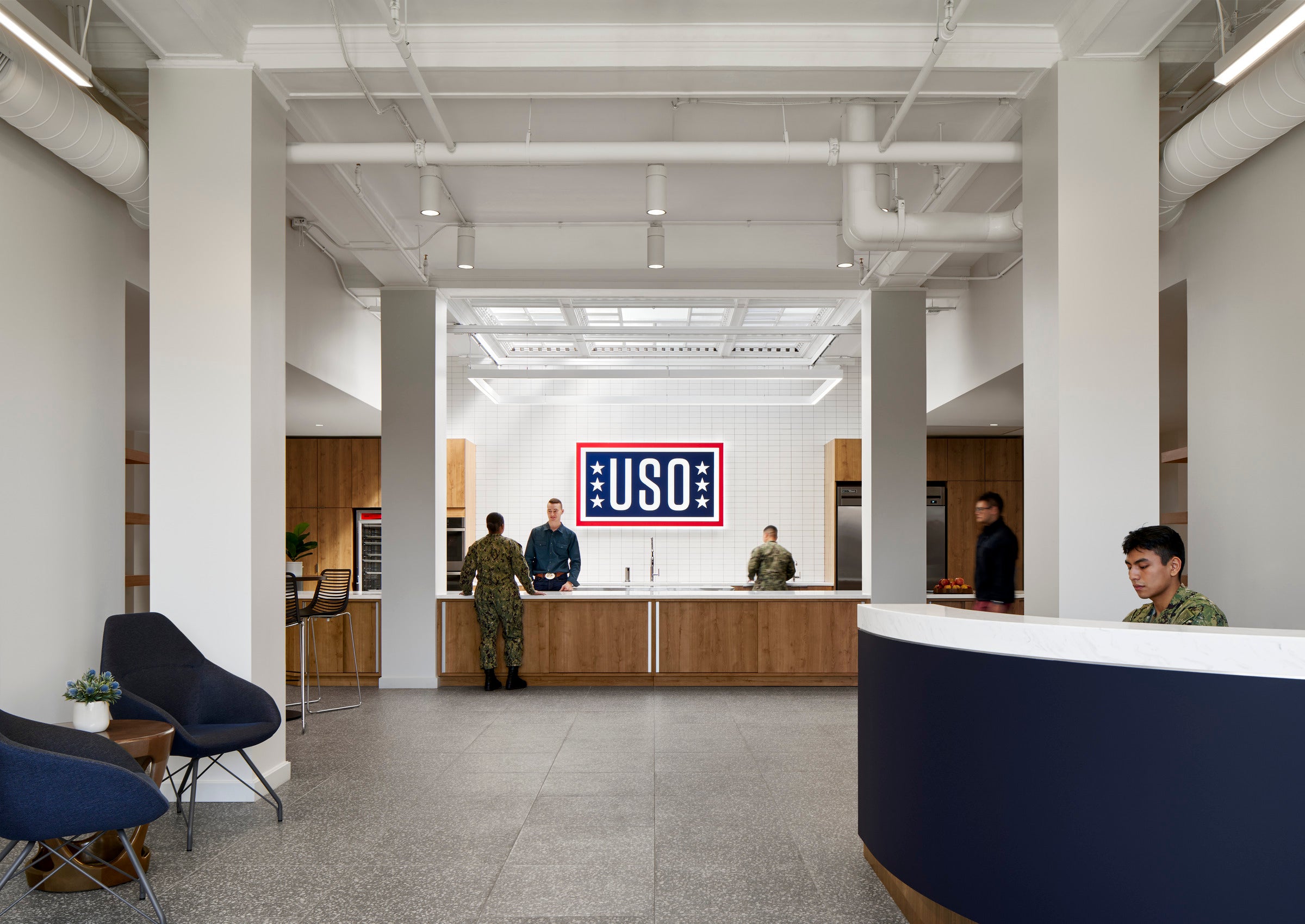 Visitors enter the building at the café area, which is lit overhead by one of the building’s original skylights.
Copyright Andrew Bruah/ Courtesy Perkins Eastman

The open-plan areas stretching out from this core appeal to recreation such as music, pool, Ping-Pong, and gaming on one side, and quieter pursuits on the other such as reading, reflection, and watching TV. The design is the result of Cumar-Malhotra, along with design lead Elma Milanovic, asking “tons of questions,” Schmidt says. “They embraced the stakeholders before, during, and after.” 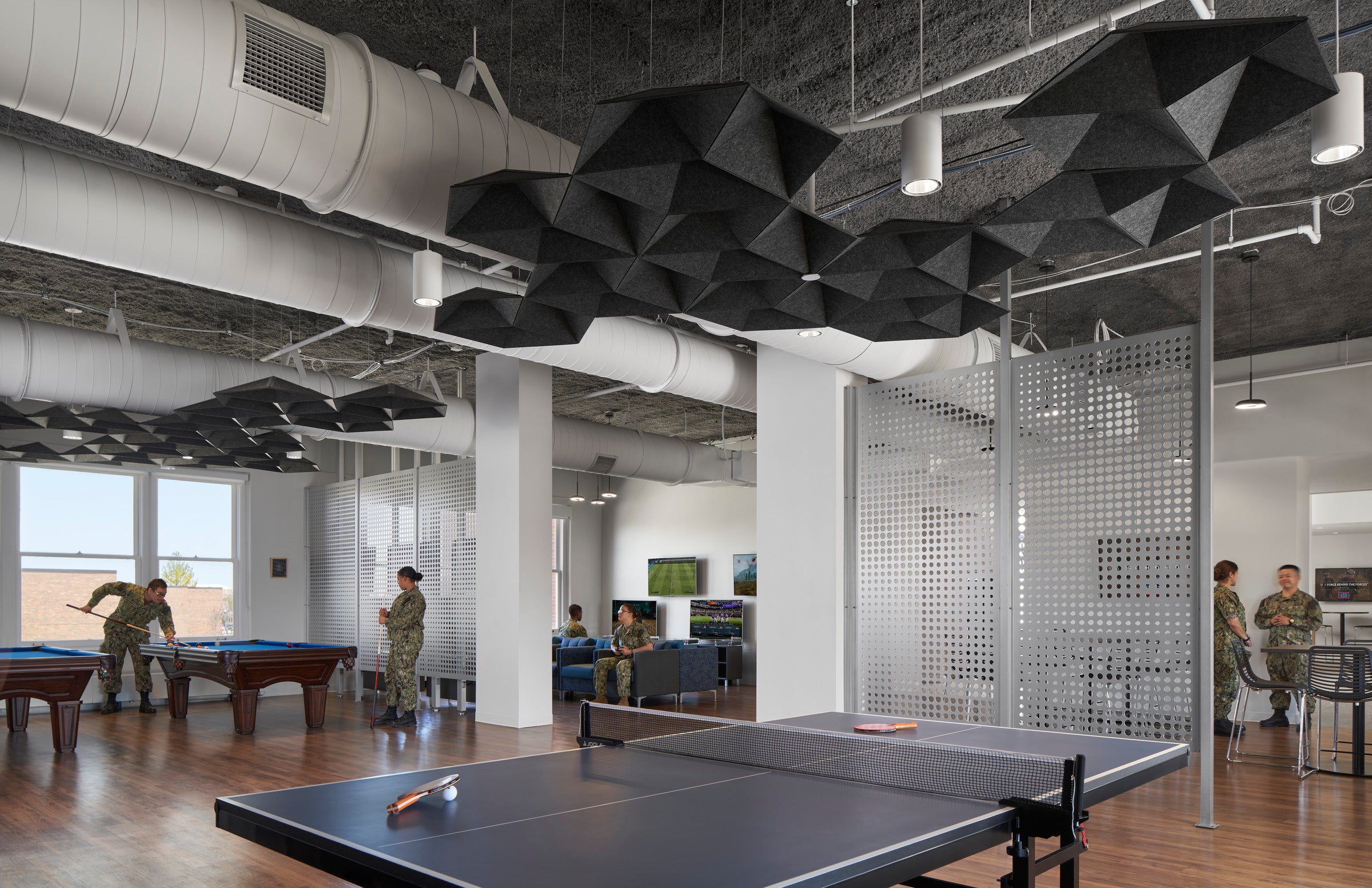 Banks of screens in a corner of the “active” wing allow service members to game with far-away friends and family members; decorative baffling hangs over the pool and Ping-Pong tables to keep the sounds from traveling.
Copyright Andrew Bruah/ Courtesy Perkins Eastman 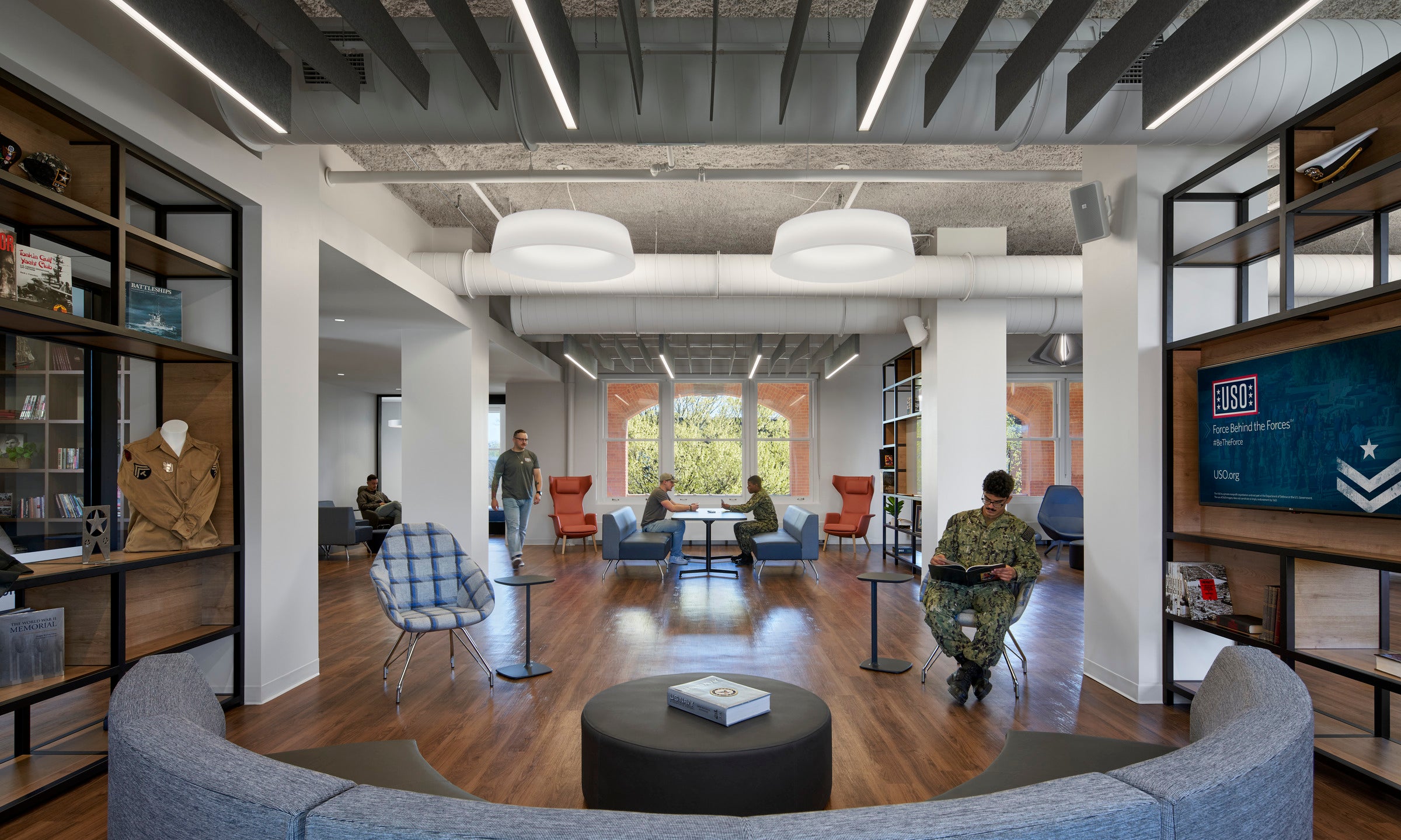 Bookcases serve as dividers in the “quiet” wing, which includes an area for computer use and a closed-off room for meditation, prayer, and reflection. Copyright Andrew Bruah/ Courtesy Perkins Eastman

The hit of the new space is the music room at the far end of the recreation area, which is filled with instruments and music-mixing machines—an element that service members identified as a priority. “It’s almost in constant use,” Schmidt says. 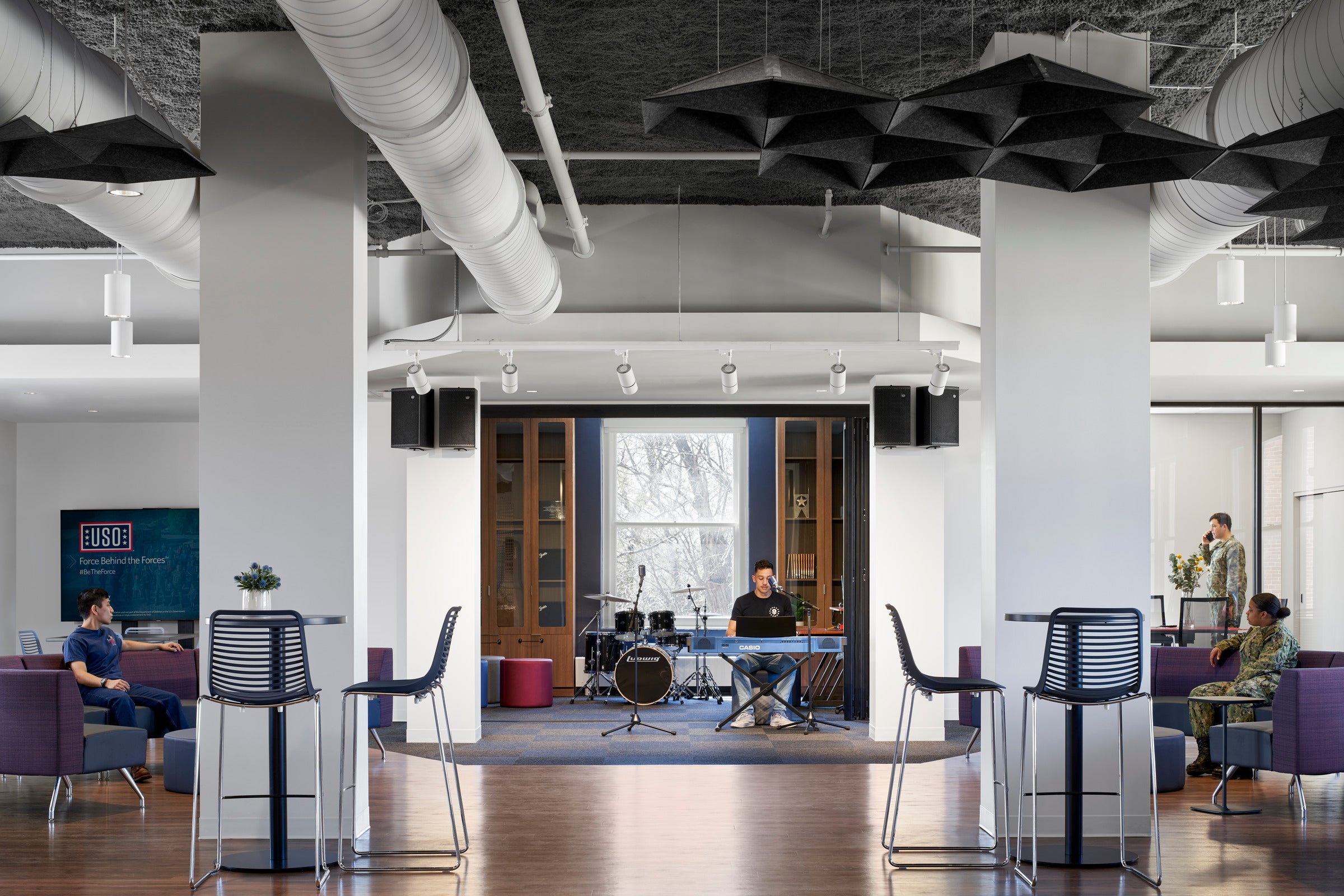 The music room can be open for performance or closed for practice.
Copyright Andrew Bruah/ Courtesy Perkins Eastman

But most of all, “the space design is an amenity of its own,” Schmidt says. Where before the center was “closed-off by walls and lacked an open feel due to its fragmented” rooms, he explains, the new plan is streamlined and open, with lighting controls and decorative baffling in the high ceilings to keep noise levels in check. The new HVAC, too, keeps everyone comfortable. 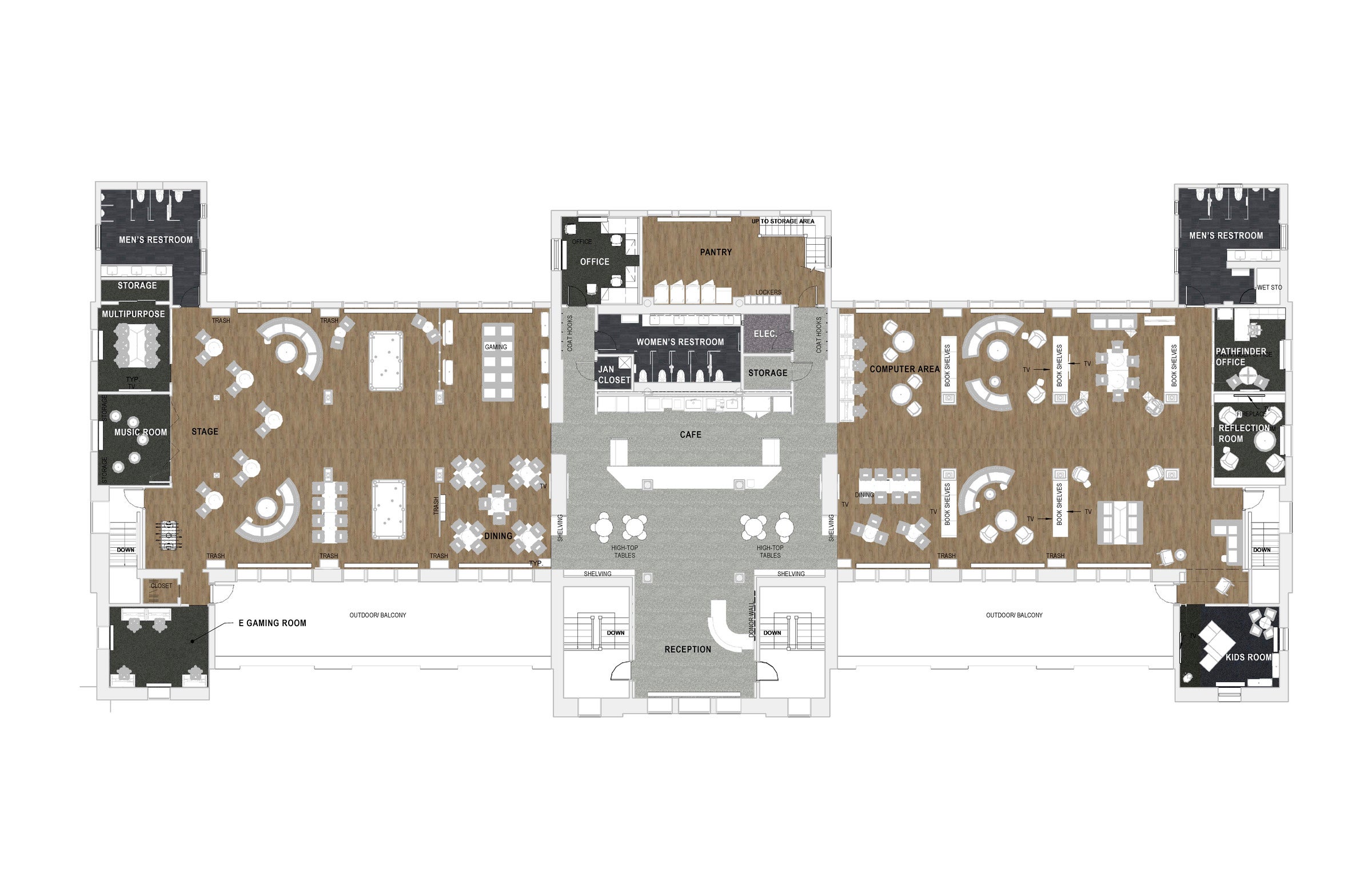 A plan of the USO Great Lakes Center illustrates the central entry/cafe core,
flanked by the active wing on the left and the quiet wing on the right.

Cumar-Malhotra describes the effort as driven by Midwest Regional USO President Alison Ruble, a civilian who’s devoted more than sixteen years to the organization. “This was Alison’s baby. We were really blessed to have had that journey with her,” Cumar-Malhotra says. The reverence paid to those who serve their country, she adds, was deeply impactful throughout the process. “It’s those values you hold close to you. You take care of the people on the front lines, no matter what.”

“The vision was to create a home away from home that is also a state-of-the-art facility,” Schmidt adds. “I would say, ‘Mission Accomplished.’”