Architects are looking to nature as a guide to protect communities from climate-related disaster.

A rendering of the boardwalk at Arverne by the Sea on New York’s Rockaway Peninsula.

Climate change and resiliency weren’t big talking points in the early Aughts, when Perkins Eastman Principal Eric Fang (then with EE&K, which ultimately merged with the firm) took the lead on a master plan for Arverne by the Sea, a mixed-use development on the sensitive Rockaway barrier peninsula in Queens, New York. “We had raised the question about sea level [rise], which at the time was not something that people were talking about a lot,” Fang says. Nonetheless, the plan provided for raising the community five feet higher above sea level, landscaping a double-dune buffer from the ocean, and installing a large network of underground stormwater catchment areas. Utility lines were also laid underground along with flood-resistant submersible transformers.

Fast forward to the onslaught of Superstorm Sandy in 2012, when Arverne survived largely intact—an island amidst devastation all around it. The project set an example for many more to come, establishing Fang and Perkins Eastman as experts in planning for resilient communities. Every year since that storm, Fang says, the firm has taken on at least one major resiliency planning project as a result. Fang also serves on the statewide New York Rising Community Reconstruction Program, designed to consult with communities, residents and business owners on storm resilience and recovery. And following our merger with VIA Architecture in July, 2021 (now VIA—A Perkins Eastman Studio), the firm has added significant west-coast expertise in resilient transit-oriented development.

The definition of resiliency in the built environment differs according to the needs and location of each project, Fang explains, but it’s always grounded in the same philosophy, which is that a diversity of solutions—both natural and man-made—plus a redundancy of systems need to work together to protect towns, businesses and homeowners from climate-driven destruction. This worldview departs from the traditional one-size-fits-all tendency toward “gray infrastructure—sea walls, culverts, pipes, hard stuff—and that’s really been the approach for the last hundred years,” Fang says. Green infrastructure, on the other hand, works with nature and not against it. Open swales, trees, rain gardens, constructed wetlands, and green roofs are among the more natural alternatives that can do a better job. By providing a diversity of infrastructure strategies, communities can adapt to a variety of future scenarios. “You need to have a larger vision and compelling strategy to pull together the complex actions needed to build community resilience,” Fang explains. “It can’t be just a laundry list of best practices. It’s going to be a different future, and we’re going to have to live with the water.”

Nature as a Guide

Nature itself has already demonstrated why this vision is so successful. Members of the firm’s sustainability team look to wetlands as an example of nature’s own drainage system, which retains and slowly filters stormwater through its network of diverse grasses and trees to prevent flooding and pollution.

“Taking our cues from how nature has responded to events over millions of years can inform our design thinking,” says Tanya Eagle, Perkins Eastman’s director of sustainability standards. “Resilient communities operate similar to successful ecosystems, because they involve many networks of social and physical relationships, and they evolve to meet the needs of everyone who lives in them.” Monoculture, on the other hand, portends damaging effects to the environment, as we can see now with the proliferation of jellyfish in the world’s oceans because their natural predators are overfished and the water’s temperature and acidity has been steadily increasing.

Above left: Wetland habitats such as this one in South Carolina support diverse plant and tree species that act as a filter for water going out to the sea, and a buffer from coastal storm surge coming back in. (Photo by Bre Smith on Unsplash). Above right: The proliferation of jellyfish may look beautiful in pictures, but it indicates a damaged, unbalanced ocean ecosystem (Photo by Kateryna on Unsplash).

Nature’s inclination toward redundancy, diversity, and adaptability, Eagle points out, should inform our built response to catastrophic events that are overwhelming communities with ever more regularity. That’s one of the reasons Perkins Eastman joined more than 150 AEC firms nationwide this year to sign a “Build Back Better” letter to the Biden Administration, urging its climate leaders to include stronger building-sector policies in their efforts to curb climate change. “Healthy Housing and Resilient Communities” was among the six objectives outlined in the letter. “Investment in housing and communities is critical to addressing all of today’s intersecting crises: Climate change; COVID-19; racial injustice, and economic inequality,” it says.

Fang has worked with communities for nearly 20 years in over 20 strategic consulting, urban planning, and architecture projects designed to protect them from climate-related threats—work that has bearing on equity as well, as the letter points out, because lower-income populations have traditionally settled in lower-lying elevations that are most prone to flooding. In a 2017 article for the New York AIA quarterly magazine, Fang demonstrated the undeniable need for better planning and protection. While coastal flooding tends to dominate media coverage, he wrote, “a more endemic, and arguably far-reaching effect of climate change has remained relatively unexamined: The increased incidence of extreme precipitation events that are caused by warmer air and contain higher amounts of water vapor.” Heavy rainfall events increased 71 percent between 1958 and 2012, Fang wrote, citing the Center for Climate and Energy Solutions, while the National Oceanic and Atmospheric Administration predicts extreme precipitation events will double in the Northeast, Midwest and Northwest regions of the county by the end of this century.

One notable project in Hoboken, NJ, shows how resiliency demands many solutions: 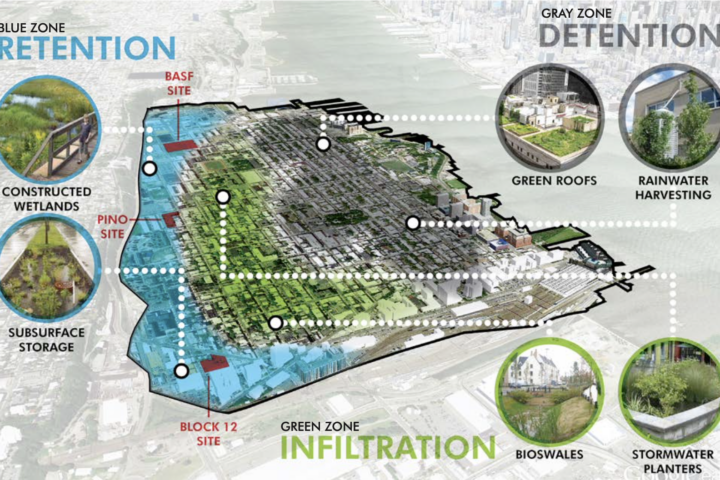 From the Hoboken Green Infrastructure Strategic Plan by Perkins Eastman.

The Perkins Eastman team analyzed the city of Hoboken’s subsurface conditions to propose a comprehensive and integrated set of actions to bolster the city’s ability to deal with major flood events. The linchpin was a framework of three zones: The Gray Zone promotes solutions such as rainwater harvesting and green roofs because the soil is not absorbent enough to infiltrate stormwater efficiently, whereas neighborhoods in the Green Zone rest on more soil atop the bedrock and can take advantage of measures such as bioswales, rain gardens and stormwater planters that filter stormwater into the ground. In the Blue Zone, the plan identified the city’s lowest-lying neighborhoods as most appropriate for stormwater detention in the form of constructed wetlands and subsurface storage that absorbs and slowly emits stormwater overflows.

“This is a comprehensive approach to green infrastructure,” Fang says. “The Hoboken Green Infrastructure Strategic Plan spelled out actions that different parties could take and emphasized that resiliency is not just something that the government has to do,” Fang adds, noting that everyone from homeowners and business owners to developers and policymakers must play a role in accomplishing these goals.

VIA is now helping San Francisco, Vancouver, BC, Portland, and Seattle develop resilient transit networks integrated with housing. VIA’s work adapting communities to rapid transit touches on social equity as well, because older and poorer populations tend to be more dependent on public transportation, so they’re hardest hit when severe weather incapacitates bus and rail lines. “As architects and planners, this is a core responsibility for our profession because we’re bringing such a holistic view,” says VIA Principal Steve Line. Adds Principal Kate Howe, who recently authored a sustainability action plan for the Bay Area Rapid Transit District in Oakland, “The functionality of these systems really does impact how we live.”

In Portland, OR, for example, VIA’s planning for the city’s Southwest Corridor Project goes far beyond rails and stations. “Portland has the sophistication to talk about the whole range of interventions, from hard structures to social structures,” Howe says. TriMet, the city’s transportation agency, examined things such as home affordability and displacement; access; and adaptation for the future when it was determining the location of its stations, she says. And there’s already good precedent: In its report outlining the recently completed MAX Orange Line’s 7.3-mile extension, TriMet described a series of workshops VIA conducted in which the agency held staff accountable to assign equal importance to social, environmental and financial considerations in the project design. Among its many innovations to plan and build sustainably, the Orange Line included approaches similar to Fang’s work on the east coast: Installing swales, planters, and rain gardens along tracks; planting green roofs on station structures; and designing stormwater systems at stations that direct rainfall runoff to onsite treatment. 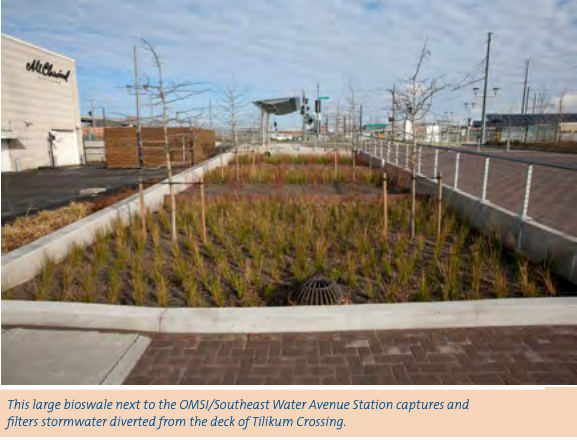 Building from the Orange Line’s success, the Southwest Corridor Project demonstrates how an agency can plan for resiliency beyond the watershed. With a focus on TriMet as a transportation service provider, this latest MAX extension project sets its aims high, incorporating miles of new sidewalks and crosswalks, protected bike lanes, an inclined elevator to a major hospital, and a target for up to 900 units of affordable housing along the rail corridor to be delivered by its jurisdictional partners. As the project’s architectural lead for all City of Portland stations, Line observes, “We’re not designing just for life safety anymore. It’s about being able to open up for business a few days later,” and that’s why it’s critical to locate businesses and affordable homes along the network for those who depend most on public transportation. By providing a diversity of transit and pedestrian options, the transportation network acts as an integrated ecosystem that can distribute resources between various modes of transportation in response to future events and conditions. 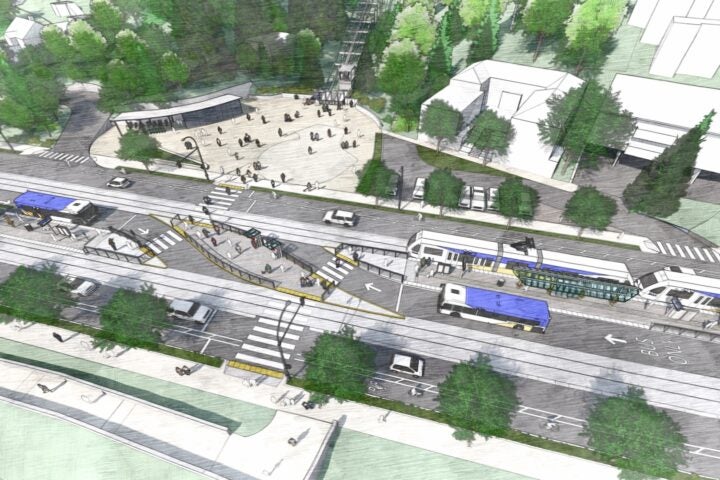 From the Southwest Corridor Light Rail Project Conceptual Design Report: Gibbs Station illustrates a shared transit way and an inclined elevator to the Oregon Health & Science University Hospital. This report is by the Urban Design Integration Group, where VIA-A Perkins Eastman Studio was a member with Portland-based ZGF Architects and Mayer/Reed Landscape Architects.

The Present and Future of Resiliency

Planning for the increased frequency and force of climate change requires looking to nature for wisdom and inspiration to design adaptable communities that are socially, economically, and environmentally resilient, Eagle notes. We need to work in partnership with the natural environment to meet the needs of our communities. To build long-term stewardship, we must involve residents, businesses, developers, and government agencies. Diversity in the planning process is critical to ensuring that the resulting plan includes the complexity and flexibility required for a resilient future. Architects and urban designers are already well positioned to play a leading role in bringing these groups together to navigate big-picture solutions for each city and town, Fang says, just as his team already does with urban- and master-planning projects.

“The real problem is trying to figure out the problems that need to be solved, and making sure you have consensus with the public and stakeholders,” Fang says. “That involves a much broader set of skills, which architects are uniquely prepared to bring to this challenge.”