Since losing his sight, architect Chris Downey is out to prove that design is a vision that goes far beyond the eyes.

Think about some architectural or landscaping elements that can add to a building’s character. Are they columns at the top of wide, limestone steps? Maybe some shade trees that drape over the sidewalk? Or an open, industrial stairway that rises up through a lobby? They’re all lovely gestures for sure, but San Francisco architect Chris Downey would like us to “see” those things without our eyes. 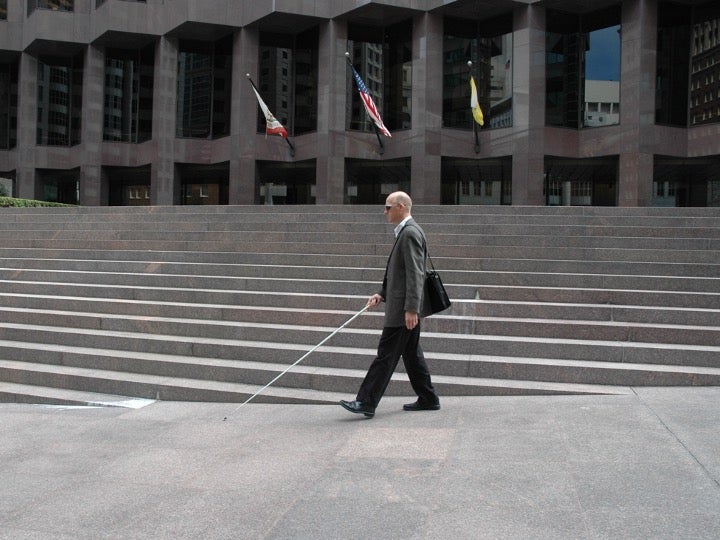 Downey is blind. That means columns without setbacks, for instance, pose a (painful) greeting at the top of those steps. Low-hanging tree branches impede his path, even when his cane suggests an open sidewalk. Same thing with the cool floating stairway if he’s approaching from the side—the cane goes underneath it while he walks right into its I-beam stringer.

Downey spoke to the Perkins Eastman staff on Wednesday, just ahead of International Day of Persons with Disabilities, which is recognized globally each year on December 3. Downey revealed to the firm his world as a blind architect—and his mission to help sighted professionals think about design in new ways to provide beauty without barriers. “We’re architects,” he said. “We’re trained not to shrug away from challenges. We revel in the unknown. We revel in the exploration.”

Downey was used to following code requirements before he went blind, he told Perkins Eastman, but once he became the man in the diagram, they developed a whole new meaning: 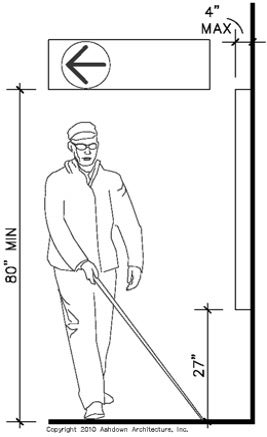 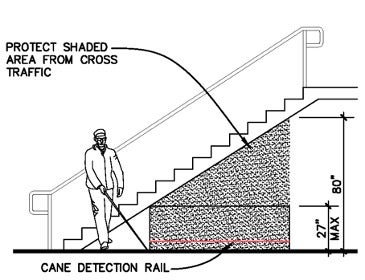 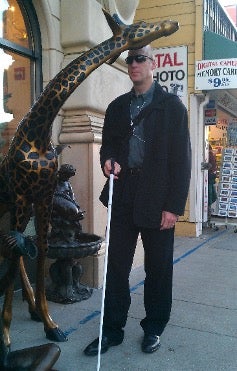 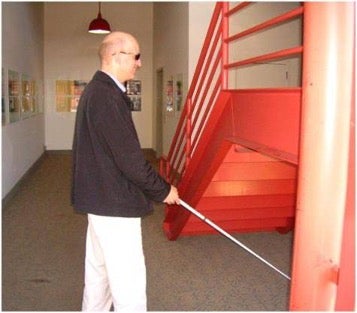 Downey has been exploring these unknowns since 2008, when he became blind following an operation to remove a brain tumor that was near his optical nerve. At the time, he was 45 and led a “rather robust, typical practice” as its owner and principal. Within hours of learning his condition would be permanent, he found himself listening to a social worker tell him about “career alternatives.” After all, how could an architect be blind? That was the moment he resolved to live out the answer. His journey, which he’s described in TED talks and has been profiled on 60 Minutes, has led him to believe there’s a beautiful power in disability. “We have to get away from the deficit model of disability,” he told the Perkins Eastman staff. “It can be additive. You can find new values, new possibilities,” rather then feel lost in the notion that “I can’t.”

The Tennessee native grew up in a world of Southern hospitality, for example, where everyone in his community would stop and say hello, but he had to tamp down that instinct when he moved to the city. Once he became blind, however, “now people were speaking to me” as he navigated the sidewalks and crosswalks with his cane, giving him greetings of encouragement, or stepping in to offer help if he was headed toward an obstacle. “There’s lots more engagement when you’re blind,” he said. “That’s the power of disability, to bring everyone together.”

Downey calls these post-sighted discoveries “Outsights.” Rather than listen to the social worker, he was back in his office a month later, even before starting the intensive training on things like reading Braille, learning text-to-speech computer software, using a cane, and navigating public transportation. “They don’t like it when we drive,” he likes to joke.

He also found new tools for his job. He gets floor plans and elevations printed with embossed lines so he can “see” them by touch, and then uses children’s wax craft sticks to mold suggested changes on top “like a trace overlay on base drawings.” 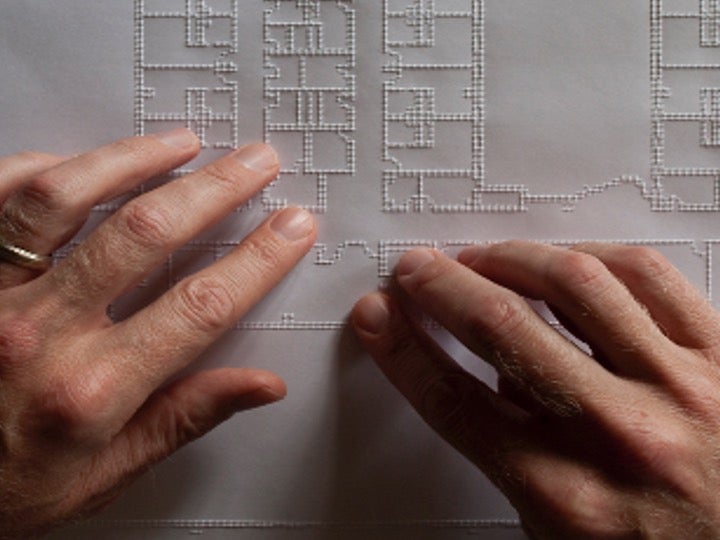 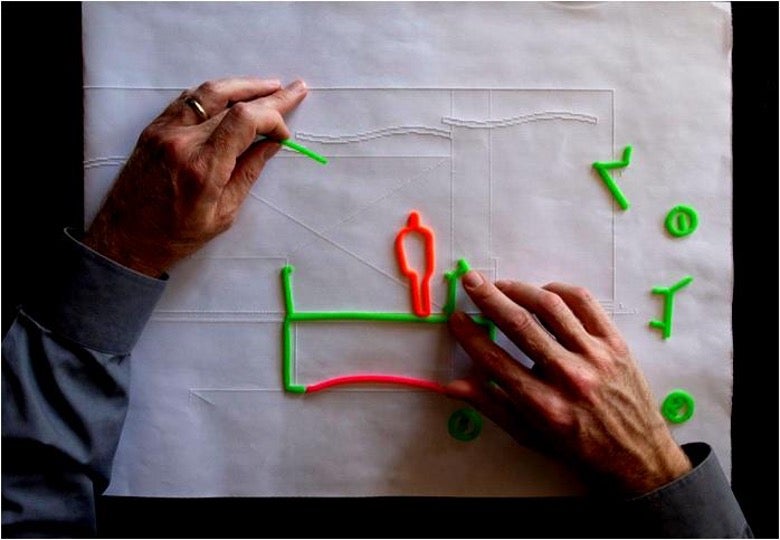 He worked with the SoundLab at Arup, an international engineering firm, to develop an auditory design protocol where, based on a plan’s specifications for floors, walls, and ceilings, a program can generate the types of ambient soundscapes a user might experience when entering that space. Every material has its own haptic feedback, Downey noted, whether it’s brick, porcelain, rubber tile, asphalt, concrete, or carpet. The SoundLab generates an audio demonstration of how Downey’s cane tapping the ground might sound in that space so he can make material selections and form decisions based on the most pleasing and effective acoustic experience. Material variety also helps with navigation—hardwood walkways versus carpeted seating areas, for example, or desks and counter colors that contrast sharply against flooring so those with low vision can discern where they are.

Downey has become a sought-after consultant to help design environments for the visually impaired, and he’s come to realize that his design-development tools help his clients as well as himself. He told the Perkins Eastman staff a story about one client, blind like him, who could go over embossed plans and formulate her own opinions of a proposed layout, rather than listening to someone describe it. “I was able to share them directly with her, giving her agency so she could make her own decisions and not rely on others,” he said.

Fourteen years of practicing “architecture beyond sight” thus far have underscored an imperative for Downey that his sighted peers might forget amidst the industry’s reliance on computer programs that can generate hyper-realistic plans and renderings. “It’s about designing for more than just the eye,” he said. “It’s not just your eyeballs going on a tour. They’re going there with your whole body.” That’s the approach Downey had to take at LightHouse for the Blind and Visually Impaired in San Francisco—the organization that trained him to adapt when he was newly blind, and where he later served as its board president and an architectural consultant during the outfitting of its new facility on Market Street. 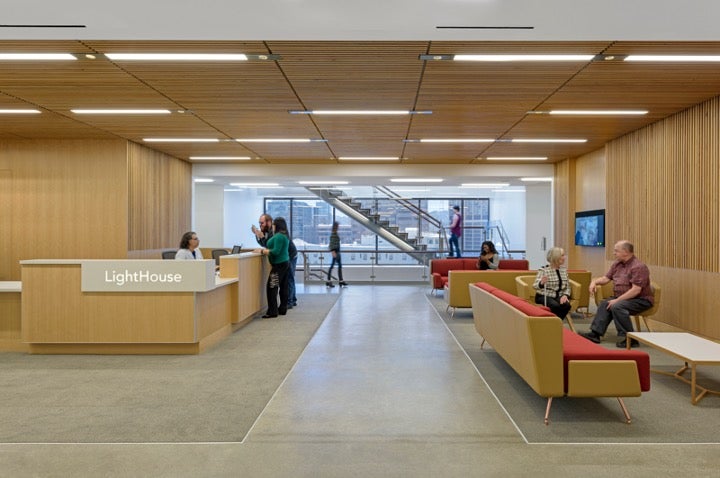 The lobby for LightHouse was organized to be navigable via different flooring materials. The carpeting and the slatted wood that wraps the space help mitigate echoes. Downey also specified a notch in the reception-desk counter where people can rest their canes so they don’t fall down. Copyright Jasper Sanidad Inc., 544 Media/ Courtesy Mark Cavagnero Associates Architects

He helped specify a luxurious Brazilian-hardwood handrail for the organization’s central stair that extends through the heart of the three floors it occupies in its building—“molded to feel warm and welcoming in the hand and physically connect visitors to the space through touch and scale,” according to a profile in Architectural Record. Such details “convey that sense of delight, that joy of design, even when you can’t see it,” Downey said.

Downey’s overall message to designers at Perkins Eastman was that universal design—or “universal delight” as he likes to call it—goes much further than simply meeting a code to make everything accessible. As former LightHouse CEO Bryan Bashin once told him, “We don’t necessarily need more codes in regard to blindness. We just need better design.” Bashin nailed it, Downey explained. Losing your sight doesn’t mean losing your inspiration, or losing all the years of architectural training and sighted experience that are still firmly in his head. “The creative process—that’s the essence. That’s really what I wanted to remain a part of. It’s an intellectual process. It’s not a visual process. Your pencil doesn’t know what to draw—you do.”