Architecture That Invites Everyone to Dance

Human-centered design means no one gets left out.

If “diversity” is being invited to the party, “inclusivity” is being asked to dance. Creating an inclusive environment is about a mindset and an attitude, the intentional expanding of the circle not just to invite everyone in, but to ensure that their experience is meaningful. Translated into architecture, that goal means the people who would inhabit the built environment will inform how it’s designed.

Building inclusive communities has been a hallmark of Perkins Eastman’s portfolio for decades. Three projects spanning thirty years illustrate this mission particularly well as examples of the Human by Design ethos that guides our firm.

A Safe Space to Learn

Thirty years before gay marriage was legalized—a milestone marking society’s widespread acceptance of gay rights—the Hetrick Martin Institute (HMI) founded the Harvey Milk School in an effort to create safe space for LGBTQ youth in New York City. The school, named in honor of the iconic gay rights activist, provided a unique educational environment to counteract the harassment and violence many LGBTQ students were experiencing at their schools. Opened in 1985, it was the first in the country to provide a safe haven specifically for LGBTQ students. 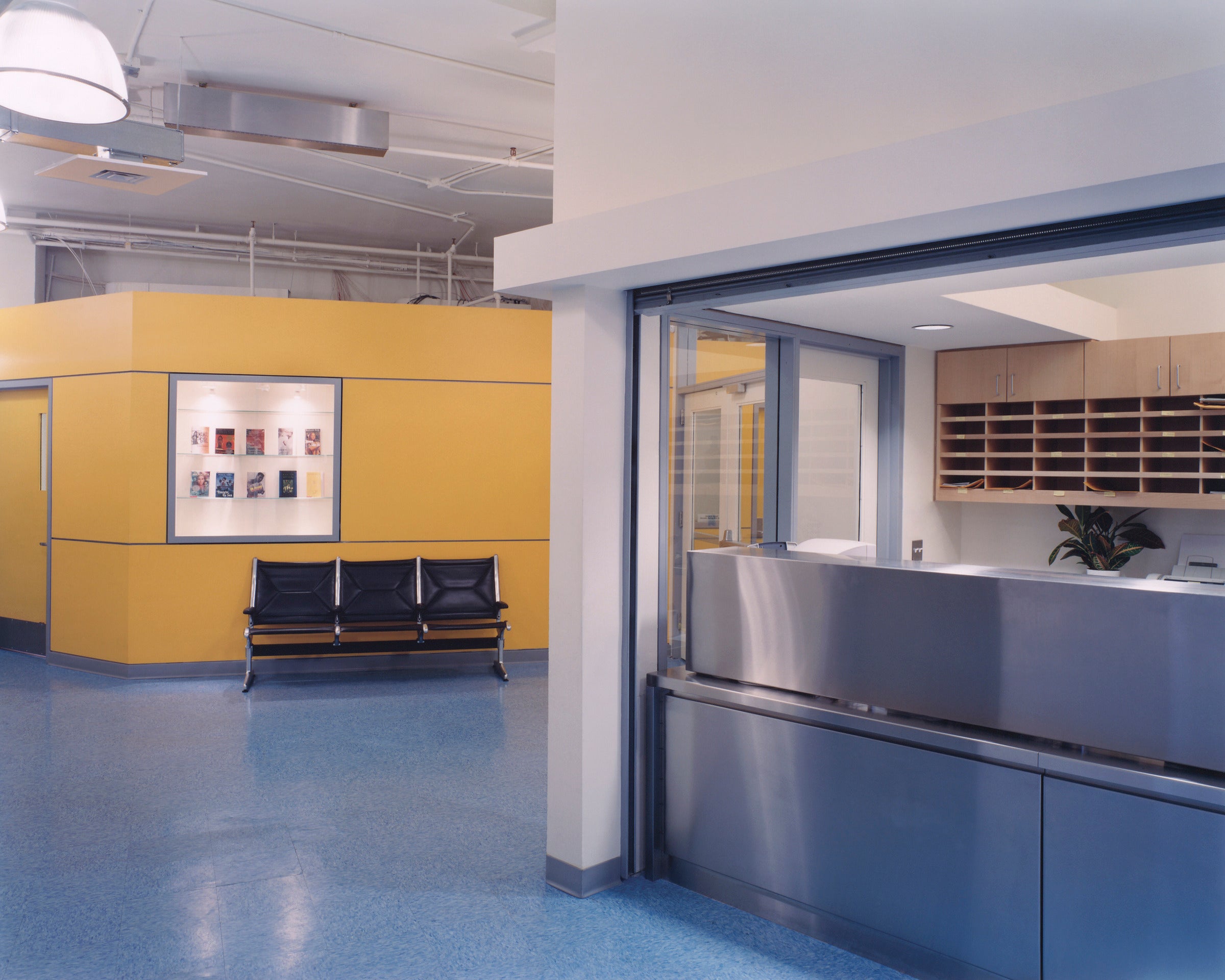 After decades of moves from one cobbled-together space to another, HMI and the Harvey Milk High School found a permanent home at the corner of Astor Place and Broadway; they turned to Perkins Eastman to design and plan the space because the firm had already built a strong relationship with the gay community. “Early days in the firm, we had extensive involvement with the LGBTQ community because we got very involved with dealing with the AIDS crisis,” says Perkins Eastman Co-Founder and Chairman Brad Perkins. “A couple of our early projects were the first AIDS hospice in New York and transitional housing for people dealing with AIDS.”

Our designers had to get creative outfitting the institute offices and school within a turn-of-the-century office building near New York University and Washington Square Park. The classrooms are intentionally small to reinforce the school’s supportive environment, and a full commercial kitchen allows HMI to provide after-school activities and social support for students and their families. Harvey Milk also provides a more robust creative program than many other public schools offer, so the design includes spaces such as a darkroom and an expansive art room.

The hallway leading to the art room, left, includes frames to display students’ work. The interior offices, right, are laid out graphically as pops of yellow within a blue and red frame. Copyright Seth Boyd/Courtesy Perkins Eastman

Accordingly, one of the school’s most striking interior elements is its bold color palette. The project’s small budget didn’t allow for any architectural flourishes or cutting-edge technology, but the color conveyed an expressiveness that other public schools at the time did not have. Bright yellow angled walls with blue trim house an office block at the core of the building, while red lockers line the hall opposite the offices. The primary palette flows everywhere—even into the bathrooms. 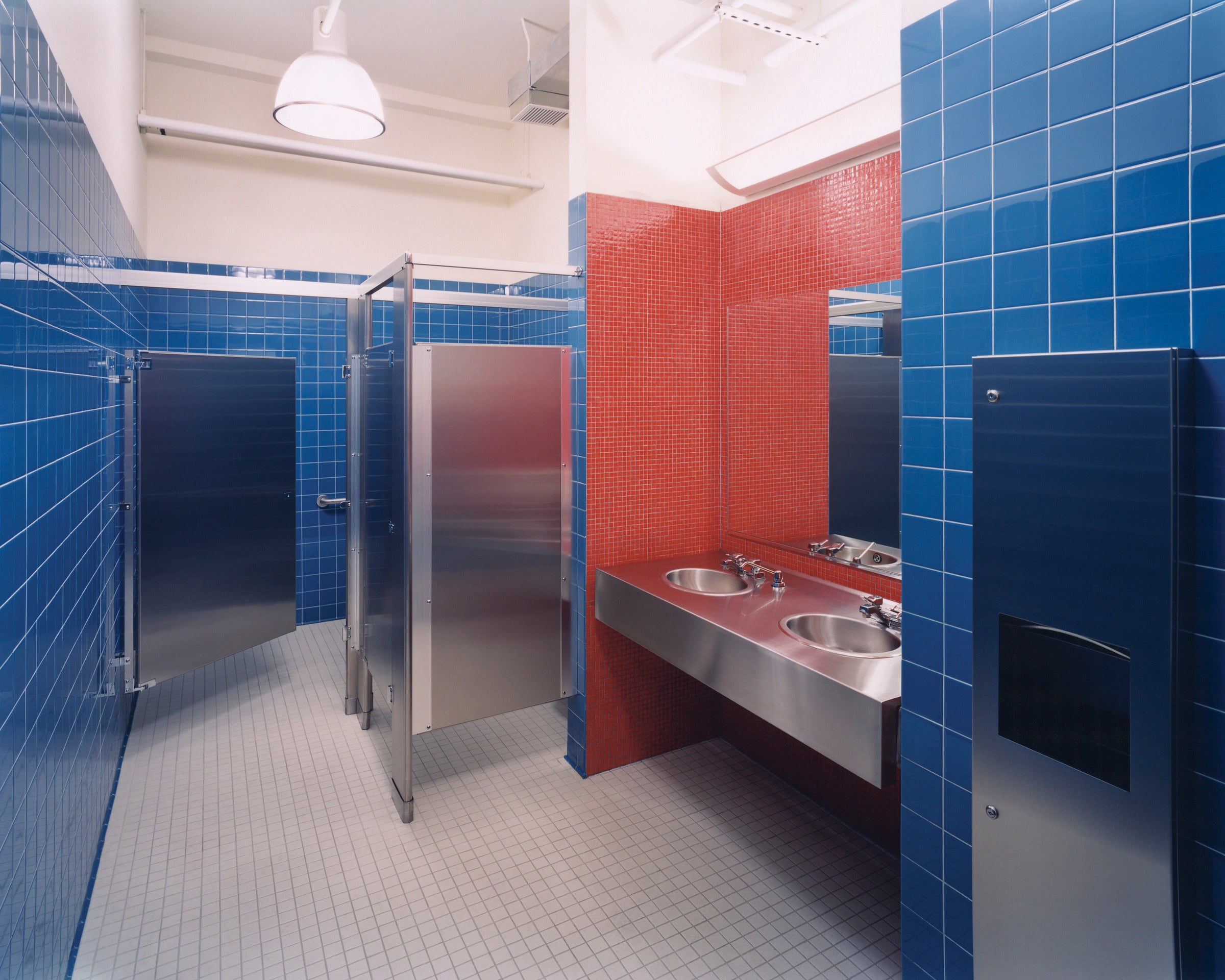 The bathrooms. “It was a little more colorful than we usually would do,” Brad Perkins recalls of the school’s energetic, primary-color palette. Copyright Seth Boyd/Courtesy Perkins Eastman

Though the New York City Department of Education has since expanded its enrollment support for LGBTQ and gender-nonconforming students across the system, Harvey Milk High School remains popular for the intimate, supportive, and expressive environment it provides. “My son has severe ADHD and identifies as being gay,” a parent writes on GreatSchools.org. “I am very thankful that I found this school, where my son gets supported and can be himself without sneers or bullying. This school teaches the students compassion, volunteering in the community, and gives them the tools they need to become successful, confident adults.”

A Vibrant Space to Grow

Colleges and universities have historically walled themselves off from their cities and towns. As New Jersey’s flagship university, however, Rutgers has sought to blend more seamlessly with its urban surroundings. The Newark and Camden campuses, for example, had become introverted over time, with hard edges between the academic realm and the neighborhoods beyond. Starting over a decade ago, Rutgers’ leadership sought to strengthen the university’s relationships with these cities and their local institutions such as schools and hospitals. 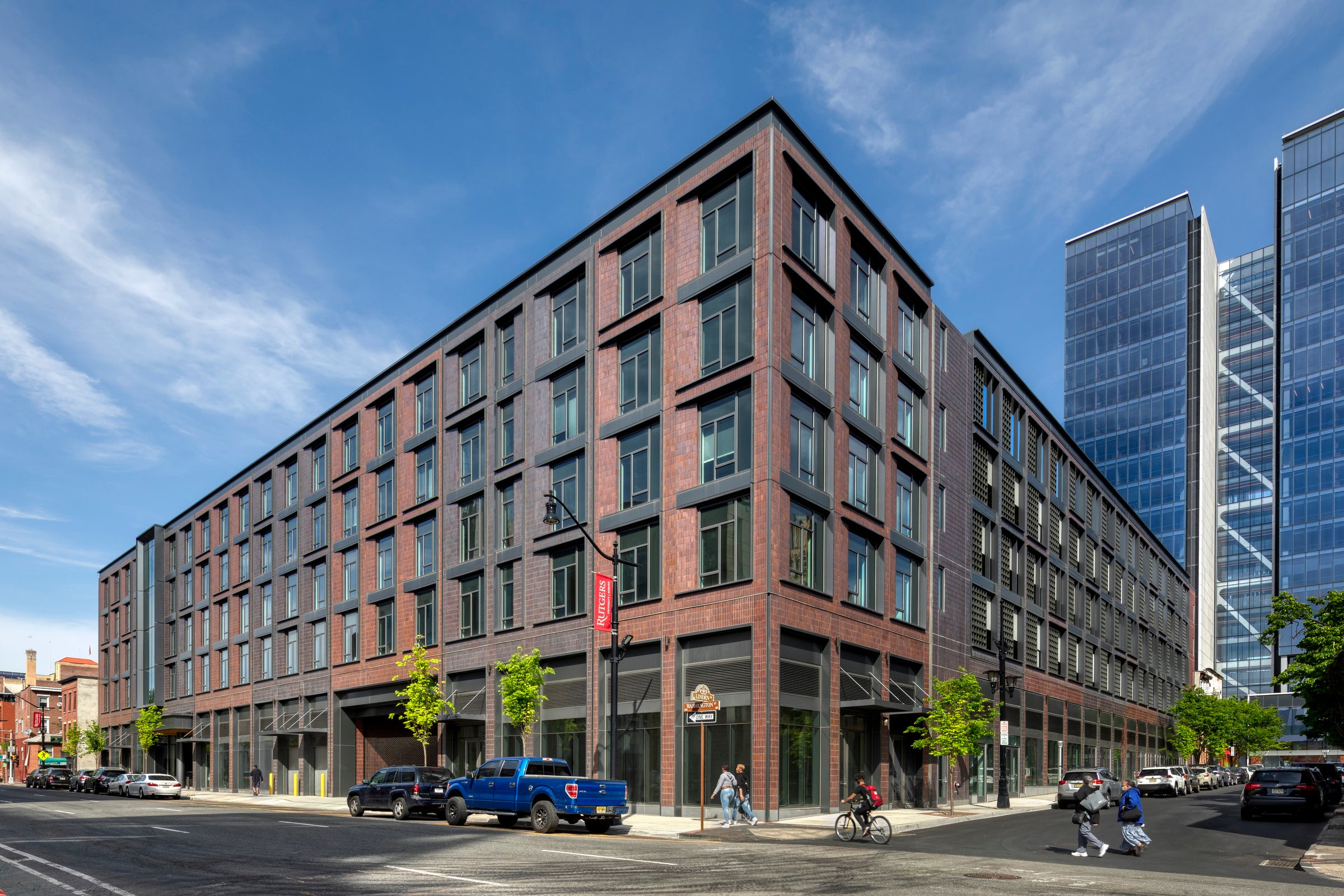 The Rutgers-Newark Honors Living Learning Community is designed to integrate into its urban neighborhood and respond to its local context. Photograph Andrew Rugge/Copyright Perkins Eastman

The Honors Living Learning Community (HLLC) in Newark is one result of that outreach. About half of the students enrolled are Newark residents, and the rest come from nearby communities. The HLLC revolves around themes of leadership and social justice: “We’re bringing together all those different students, and we’re bringing faculty and community partners together from a variety of different lenses, so we’re not operating in isolation or in silos. We’re saying we have a common vision for change, and we need everyone at the table to make it happen,” Associate HLLC Dean Marta Esquilin says in an introduction video. 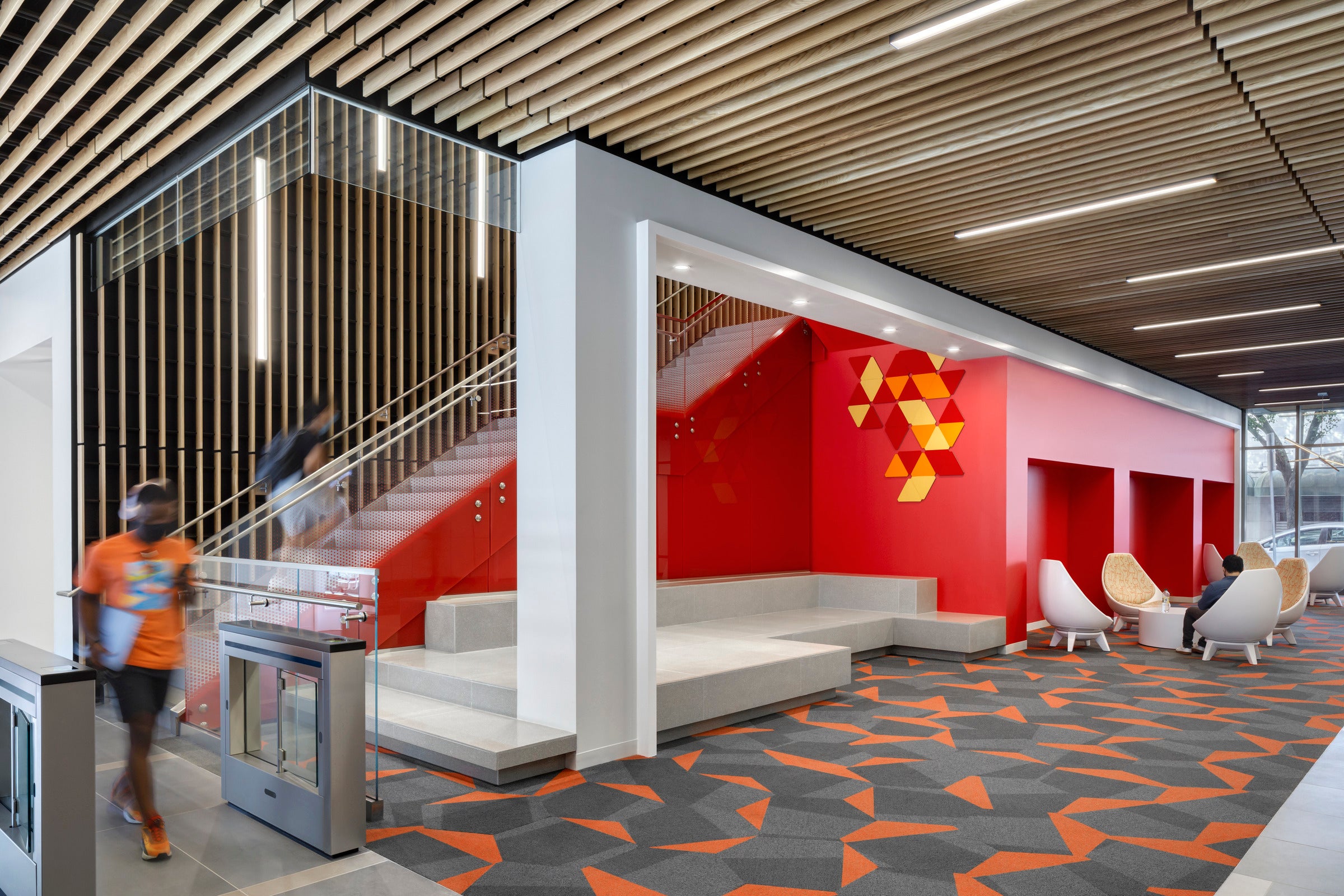 The HLLC brings together resident students who wouldn’t otherwise occupy the same building: incoming first-years, upperclass, and non-traditional students and their families. This last category includes military families, single parents, older adults returning to school, and people whose lives have detoured them from the “typical” post-high-school path to college. 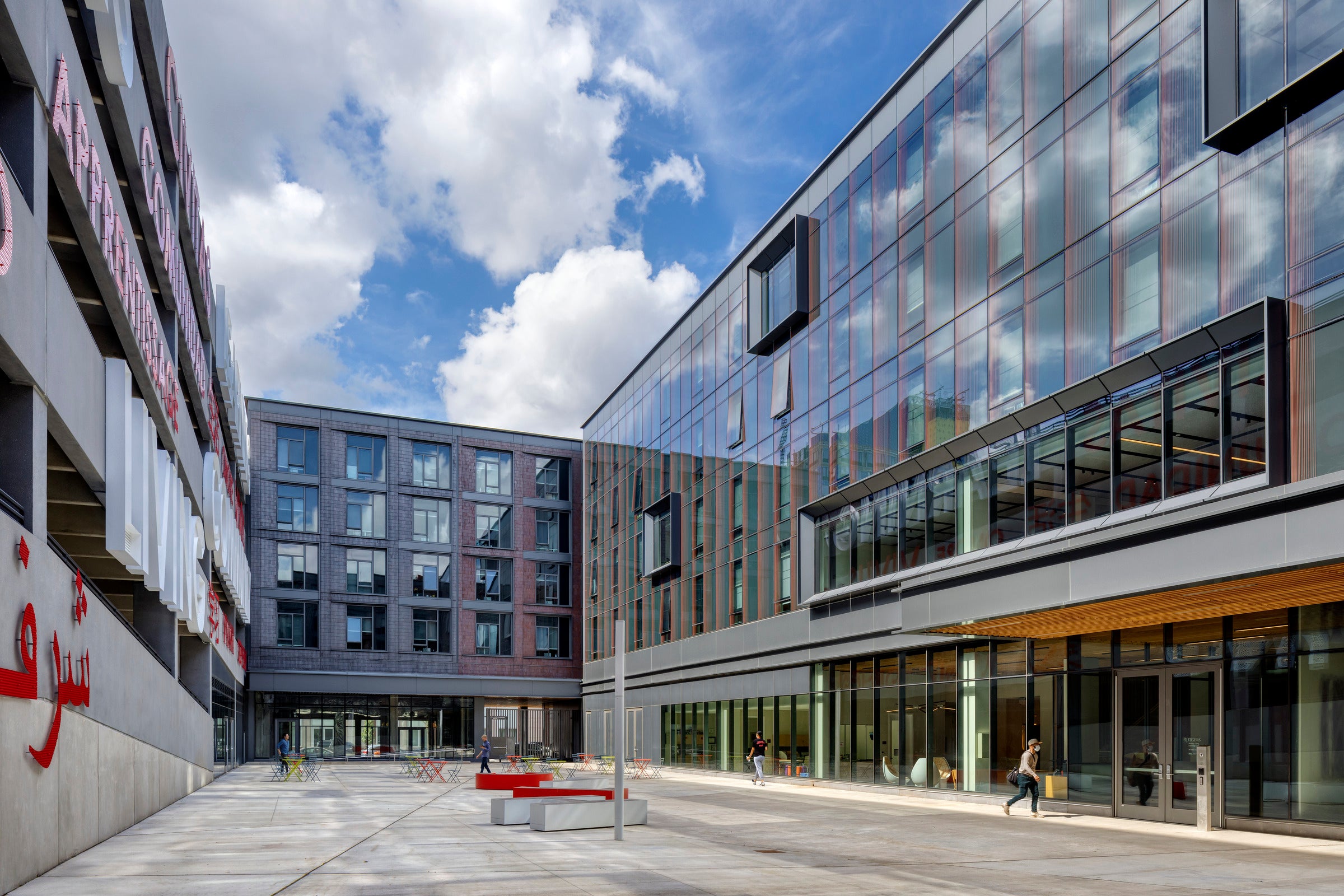 The building is organized around a social spine that threads through a U-shaped building and is designed to blend the student populations. For first years in particular, Perkins Eastman Principal Jamie Butterfield says, “Schools are trying to compete with other university offerings for first-year students” with attractive amenities and social spaces. The result? “The students that come in, even those prepared for academic life, have a less rich peer network. Throughout their first year, they’re just hanging out in a suite with their friends. They go to class and come back to their suite,” Butterfield explains. “At HLLC, there’s no separate social space for first years. It drives students out of their units, encouraging socialization, and it creates a more sophisticated peer network that sustains them academically throughout their four years.” 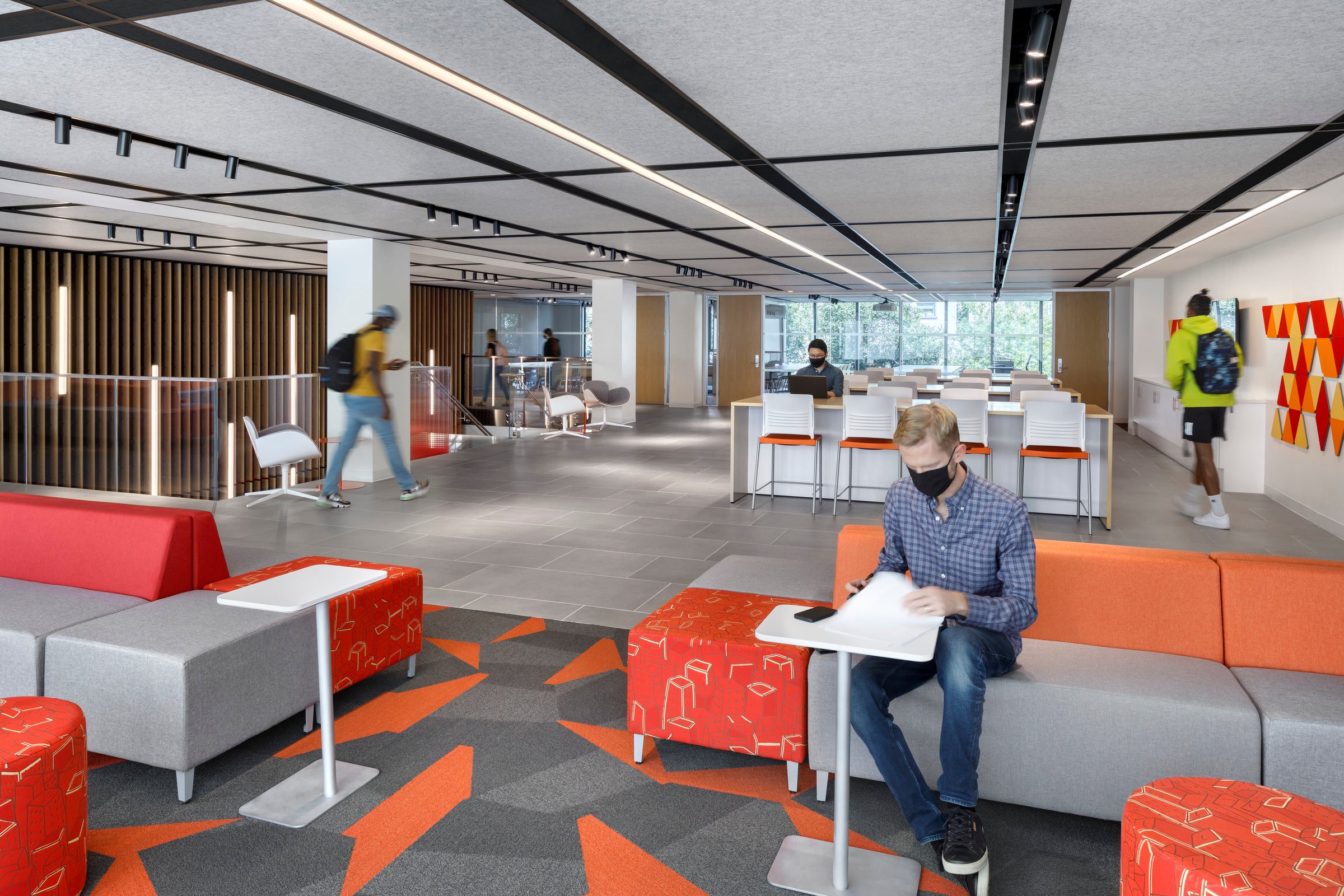 The ground floor of the building houses retail, and the interior, shaped by the U of the residence halls, forms a courtyard that is open to the public. The overarching message of the building is it belongs to this place and the people who live, work, and learn in its vicinity.

An Intentional Space to Contribute

At the opposite end of the age spectrum, seniors are often said to be entering their “third act” as they transition into retirement. But rather than fading away, this stage of life can often be a time to rekindle long-standing hobbies and passions. A renewed sense of wanting to live with intention often arises, and that extends to the places people call home. With more free time available, many older adults are leaving their too-large houses in the suburbs to live more intentionally in community. Harnessing this energy is the driving force behind Opus, 2Life’s new housing project in Newton, Massachusetts. And as it turns out, creating a collective, kibbutz-like community environment was also the key to making it affordable.

A rendering shows the new Opus, at right, which will be connected to the existing Coleman House with a connector that offers amenities and outdoor space designed to blend the populations of both buildings. Courtesy Perkins Eastman

2Life Communities has long served the low-income senior population in the Greater Boston area, but Opus comes after a decade of study into how the organization can successfully provide middle income housing. Cracking this code has been a challenge for developers and operators across the country, because the costs of providing amenities, care, meals, wellness, and services don’t often pencil out with moderate-income prices. Seniors in this bracket make too much to qualify for subsidized housing and not enough for the market rate, which skews high-end. And according to Senior Housing News, this group accounts for 54% of the populations aged 75 and older. 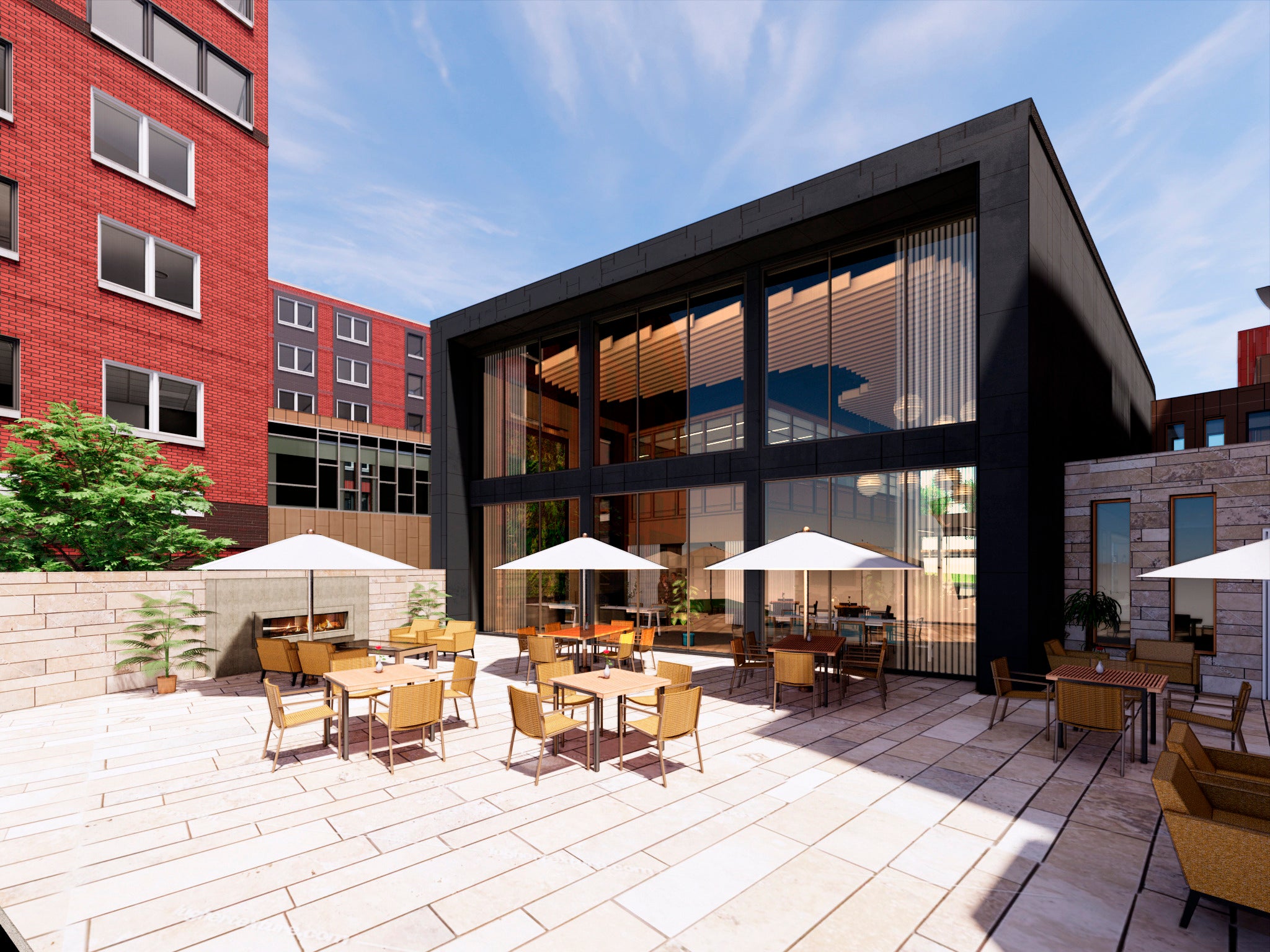 A common patio off the connector between Coleman House and the new Opus. Rendering courtesy Perkins Eastman

“If you care about equity, you have to care about aging,” 2Life CEO and President Amy Schectman said at a recent 2Life fundraiser. The new apartments at Opus–Newton will fill this housing gap through careful planning of modestly-sized resident apartments with flexible and adaptable amenity spaces that will be shared with the existing Coleman House next door, which is geared toward lower-income residents. A new amenity building will physically connect the two buildings, encouraging residents to form a larger community that breaks down the barriers of income and class. Locating the amenities primarily in their own building will encourage social vibrancy while allowing the architecture to be more efficient and expressive of the overall mission.

Two views, above, from inside the amenity-filled connector. Renderings courtesy Perkins Eastman

One of the most striking features of the new community will be a robust volunteer program. Each resident will be required to fulfill a ten-hour-per-month volunteer commitment. “One of the great gifts of a community of authentic individuals is the wealth of expertise each person has to share. Opus residents [will] volunteer to share their talents, knowledge, gifts, and passions with others in the community,” according to the project’s marketing. “Whatever skill or gift you choose to share, your authentic contribution helps build a stronger community and can give you a deep sense of purpose and belonging.”

Purpose and belonging are important themes that drive our design, and we’re proud that projects both old and new continue to reinforce our commitment to support diverse communities with buildings that bring them together—and invite them to dance.