2017 Survey: The State of Senior Living: An Industry in Transition 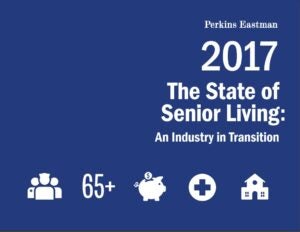 An Industry in Transition is the third in a series of industry surveys conducted by Perkins Eastman Research, led by Associate and Senior Design Researcher Emily Chmielewski EDAC. As our collective memories of the Great Recession of 2008–2009 recede, we are beginning to witness early industry shifts that may signal new partnership formations similar to those suggested by the State of the Industry survey we conducted in 2015. In this latest survey, almost 200 respondents, largely from not-for-profit life plan communities (formerly known as CCRCs), addressed five key issues that “keep them up at night”: Boomer expectations, healthcare reform, recruitment and retention, for-profit competitive growth, and middle income needs.