Basketball fans who were following the Olympic matches in Tokyo this summer saw his work at the Saitama Super Arena. British football fanatics who are eagerly awaiting construction to begin this fall on the new stadium for their Everton Football Club on Liverpool’s historic Bramley-Moore Dock know him, too. Horseracing enthusiasts booking event space and private suites overlooking the legendary track at Santa Anita Park in Arcadia, CA, for the fall racing season will also be taking in his talent.

While the typical sports fan never knows the architect’s name, Meis’ sports and entertainment venues worldwide have earned his small, twenty-five-person firm recognition from the team owners and leagues that are commissioning these projects, which inevitably involve the revitalization and integration of the urban fabric that surrounds them. Meis has been widely praised as a visionary in his field, a savvy David competing in the massive sports and entertainment space against a pack of Goliath firms. As of this week, however, he’s acquiring some major reinforcements. MEIS Architects is now a distinct studio of Perkins Eastman, and the principals on both sides are cheering. “I’ll be able to open doors for the firm that they wouldn’t be able to do on their own, and they have reach I don’t have – the ability to scale,” said Meis, whose distinguished work has earned him fellowship within the American Institute of Architects.

Meis is a veteran of huge firms such as Populous and also NBBJ, where, as a partner and co-founder of its sports practice, he led the master planning and design for the Staples Center in Los Angeles and the AIA award-winning Paul Brown Stadium in Cincinnati. He started his own firm in 2007 because he wanted to create a culture less bureaucratic, he said, and more defined by creativity and innovation. “I really think of myself as being a disrupter in the field” he said, where many of the big firms tend to be more “staid” and formulaic in their approach to stadium and arena design. That’s why it might seem remarkable that he’s now joining a form of more than 1,100 people. Generally, the idea of rejoining the sports market’s heaviest hitters “gets my hair standing up on my neck,” Meis said, but he’s found common cause with Perkins Eastman.  “They were the quiet company – amazingly big, but yet I think about them being under the radar. There’s an informality in the firm that I love, a diversity of thinking – and real diversity” of backgrounds and culture, he explained. “It’s clear people like working here.” 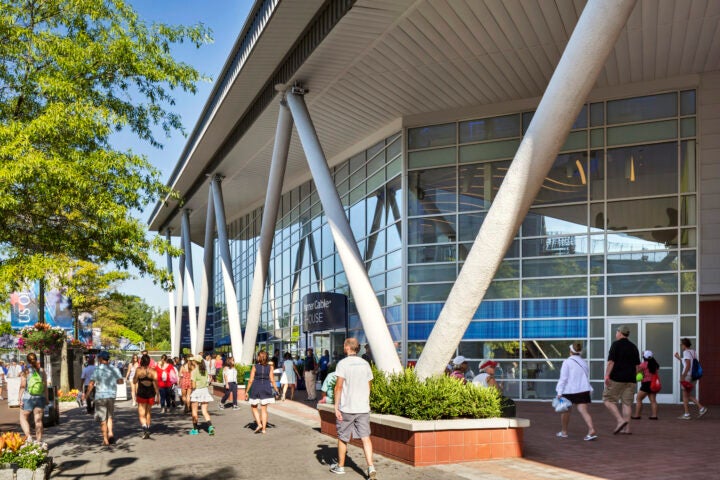 Another plus: He’s already established relationships with Scott Schiamberg, Perkins Eastman’s Director of Sports & Exhibition, and Shawn Basler, the firm’s CO-CEO and Executive Director. Meis designed the Chase Training Center at the USTA National Tennis Center in Flushing, NY, for example, where Perkins Eastman was the architect of record. Schiamberg is a Populous alum like Meis. And along with Basler, the three have gone after several projects together, starting with a stadium bid in the United Arab Emirates seven years ago when they first got to know each other.  Fast forward to 2020, Basler said, and “like a lot of people during Covid, we were re-thinking our business strategy a little bit.” The two firms had again found themselves pursuing projects together – a stadium in Jeddah, Saudi Arabia, and one at the Pimlico Race Course in Baltimore, MD –– “and we just said, ‘Hey, do we want to think about doing this?’” Basler said.

Under the new arrangement, MEIS Architects will retain its brand, which is key to helping Perkins Eastman expand its Sports practice. “That will be the calling card. Everyone knows MEIS. When [a client] calls three or four people to bid for a stadium, he’s one of those calls,” Basler said. Because of MEIS’ small size, it always had to partner with another firm going into these bids, he added. As one entity, “This allows us to see the design all the way through.” Even more than the design of these venues, both sides see enormous potential in the growth of region-defining urban landscapes that will surround them. The new partnership “is providing a level of expertise in a [Large Scale Mixed-Use] market where we do so many things already,” Basler said. He noted that MEIS can immediately dive into the firm’s new project to redevelop the East End of Nashville’s Cumberland River – a stretch that includes Nissan Stadium, whose owners have already committed to invest in expanding mixed-use development around the sports and concert venue. 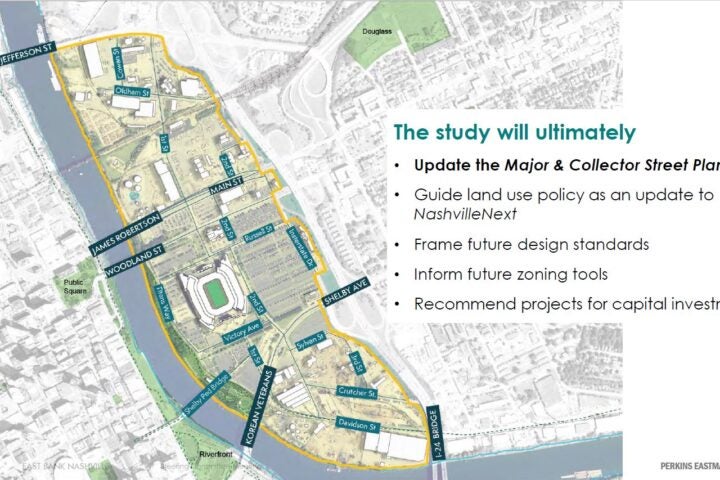 A slide from a presentation Perkins Eastman principals delivered to the city of Nashville in July, 2021, on the East Bank Planning Study

MEIS will retain its Santa Monica office in Los Angeles, but it’s already moved its smaller New York staff into Perkins Eastman’s Fifth Avenue headquarters. Schiamberg has also moved into the MEIS space in the New York office, which Meis has already branded with stadium models, signed baseballs and basketballs, model race cars, and other paraphernalia. “It means a lot to the people I recruit – they’re so excited about sports and concerts,” he said. “We like to evoke a culture of play and spectacle.” For his part, Schiamberg is thrilled to be working with more people who are as passionate about sports as he is. “We’re excited to do more things that we couldn’t do before,” said Schiamberg, whose team has been active in the collegiate sports market – with major new athletic facilities at Rutgers University and Providence College, for example – but not so much at the professional level, where there are fewer teams and a lot more competition for the big design projects. “We want to be involved with all of it, and now with Dan and his team on board, we can show up for anything,” he said. Switching to a sports metaphor, Schiamberg added that Meis now enjoys “a thousand-person bench” backing him up. “It gives him more firepower to be a disrupter than ever before. The client’s not going to be worrying that he can’t deliver a billion-dollar stadium.”

At the same time, Meis is excited about the prospect of doing more collegiate work where Perkins Eastman has a firm foothold. “The collegiate market is the new frontier,” he said. Colleges and universities “see themselves as just as important [as the pro teams], because they’re going to recruit these top athletes.” Developers and investors have already been pumping serious money into campus facilities to lure that top talent. “The market has really evolved – the line between pro and college has become blurred,” Meis said. “There’s much more work in colleges,” Schiamberg explained. “Pro athletes are not showing up to play for the Detroit Lions because their locker room is better than the Green Bay Packers – it’s a business, but for a 17-year old headed to college, that’s in play.” With Perkins Eastman’s nearly two dozen studios across the country and worldwide, Meis added, that network will give his team the local presence they never had before in competing for collegiate projects. “It was always really difficult for me, because I’d be on planes nonstop if I were closing that type of market. This is a huge opportunity for bringing our portfolios together,” he said. 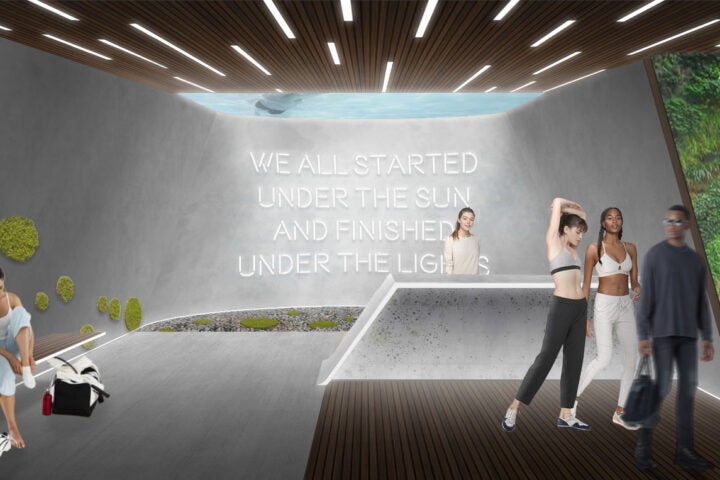 A rendering of a tennis resort for Sharapova/MEIS

Sports and entertainment aren’t the only opportunities that await Meis’ arrival. He has an ongoing design partnership with tennis star Maria Sharapova to explore hospitality ventures that license new resorts and spas under the brand Sharapova/MEIS. He’s also worked with former “Entourage” star and environmentalist Adrian Grenier to develop prototype arena seating made from recycled plastic waste recovered from the oceans. And he designed a modern new home on the Malibu shore to replace an aging bungalow for Eve Plum, who played Jan Brady on the “Brady Bunch.” The new concept sold within weeks, whereas the former bungalow had languished on the market. When it comes down to it, Basler said, “We’re adding another very talented designer on the West Coast. Dan’s a great designer. There’s a lot of things he can tackle beyond sports for us.”